My dad left me two silver dollars. They’re worth much in sentimental value (I’ll explain in a moment), but they also teach us something about how America has changed.

Here’s a photo of them. Lady Liberty is on the front, an eagle is on the back. 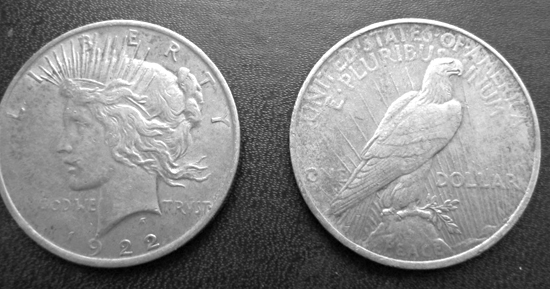 These were “peace” dollars issued in the aftermath of World War I. (Note the word “peace” under the eagle.) Imagine that: a coin issued by the USA dedicated to and celebrating peace! It’s truly hard to imagine such a coin being issued today, and not only because our currency is now made only with base metal (a debased currency?).

In keeping with U.S. foreign policy today, an equivalent 2018 (faux silver) dollar would doubtless feature the god of war on the front with a menacing eagle clutching missiles, drones, and bombs on the back.

Anyway, I promised a story about my dad’s silver dollars, and I’m going to let him tell it:

“I have a silver dollar in my coin collection. Helen and I were courting at the time. At Nantasket beach [in Massachusetts] there was a glass container with prizes, candy, coins, etc. Also a crank on the unit which when turned controlled a flexible scoop. The idea was to work the scoop to pick up something of value. Well, I took a chance. It was like magic; the scoop just went down and picked up the silver dollar. I gave it to Ma as a remembrance. We’ve had it ever since.”

“The other silver dollar has a story also. A buddy in the service [Army] gave it to me for a birthday present [during World War II].”

After my dad died, these coins passed to me. One is from 1922, the other from 1924. I love the “peace” eagle they feature, though we know peace was not in the cards for long after the Great War. And of course I love my dad’s stories of how he came to possess them.

When will America’s coinage next feature a tribute to the end of war and the promise of peace?

One thought on “William J. Astore: My Dad’s Silver Dollars”