The military industrial complex gets its revenge – it small ways and big – against President Dwight Eisenhower, who not only named it but warned against it’s proliferation during his farewell address in 1961:

In the councils of government, we must guard against the acquisition of unwarranted influence, whether sought or unsought, by the military industrial complex. The potential for the disastrous rise of misplaced power exists and will persist.

Yet here we are in 2019 and this year’s Official White House Christmas Ornament is sponsored by none other than defense industry gigantor Lockheed Martin – and not only that, it is in Eisenhower’s honor. Sure, the presentation seems like benign enough – Sikorsky, owned by Lockheed for a whopping four years, has been building Marine One since Eisenhower was the first to fly in a presidential helicopter in 1957. But really, what are we celebrating here? The homespun historical note seems designed frankly, to justify Lockheed’s sponsorship, rather than the other way around.

To get the full picture here, understand that the annual Official White House Christmas Ornament has been a collector’s item since they were first issued in 1981. Plenty of Americans wait to see what the design is each year as they celebrate the nation’s presidents – typically not their hardware or vehicles – but other vibrant icons of American pride and power. If you go in for that stuff, they are reliably patriotic, even at times elegant.

Like the Truman balcony, designed for the White House South Portico in 1947-48 by President Truman. This was the 2018 ornament.

Then there was the 2017 design which honored FDR – a golden eagle representing the emblem on the podium at his first inauguration in 1933. 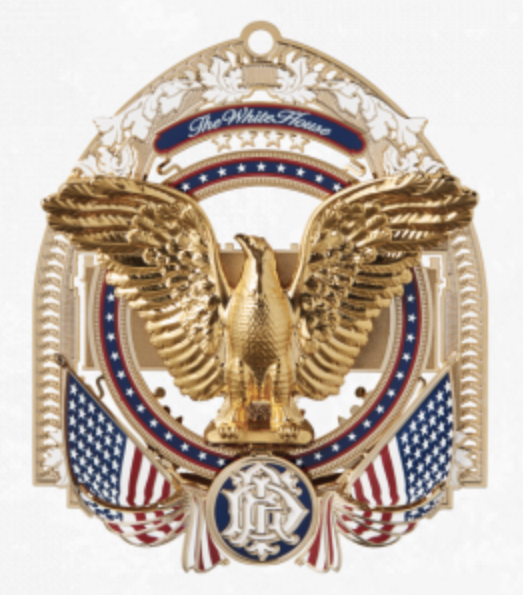 One could say that the 2016 design, a tribute to President Herbert Hoover, was a vehicle, too, being a tiny red fire engine. But it represented the fire trucks that responded to the Christmastime fire in the West Wing, saving the White House in 1929. And they weren’t sponsored by anyone.

In fact, 2019 is the first time a private sponsor supported the annual ornament. Seriously, in an era of Capitol One Arenas and Fed Ex Fields, it would have been nice to have kept the People’s House, even if symbolically, free of the corporate stink. What’s next, a tiny golf cart celebrating Barack Obama sponsored by the Yamaha Corporation? Better yet, a gleaming MQ-9 Reaper drone, sponsored by General Atomics? When does Jeff Bezos get his say?

The irony that the president who was so prescient about our current state of industrial militarism would be the first to share a brand with Lockheed Martin on your Christmas tree is rich, and sad. But as one fan of the yearly ornament tradition told me, “it’s a helicopter. Sponsored by Lockheed? I’m not buying it.” Neither would Eisenhower.