It went “virtually” very well, when the documentary that I wrote and directed, Atomic Cover-up, received its world premiere Saturday at Cinequest. Like nearly all major film festivals in the past year, this one has skipped the theaters and gone fully online, allowing viewers across the country to take part over the next week (tickets at festival site here). If you want to reach me directly and request a private “free and instant” link or interview, write to: gregmitch34@gmail.com. Here are a few “reviews” from those who have seen the film and then a summary, and many more responses.

“What a great film, and original concept. An absolutely crucial way to understanding all wars. Don’t be surprised if this documentary is a player at next year’s Oscars.” – Rod Lurie (director of The Outpost, The Contender, others)

“Very powerful. Incredible unseen footage restored and the tale of the filmmakers who photographed the destruction of Hiroshima and Nagasaki.” – Alex Gibney, Academy Award-winning director of Enron, Taxi to the Dark Side, Going Clear and many others.

“This documentary was literally four decades in the making. Check it out!” – David Corn, Mother Jones, author of several bestselling books

“After writing three books on the topic, Mitchell finally obtained the film footage that America’s leaders didn’t want you to see. As a timely reminder that we hold the power to undo the stain of modern warfare, it demands to be seen.” – Will Bunch, Philadelphia Inquirer

“The understatement of the film’s style lets the horror of the long-suppressed images do all the work. It is stunningly powerful.” – Harry Shearer, actor, “Le Show” host

If this interests you, go to the film’s page at the festival which includes background, the trailer, and an easy way to purchase tickets ($3.99 and good for any time until the end of the month). Or, as I’ve said, request a private “free and instant” link, via gregmitch34@gmail.com. Suzanne Mitchell (no relation) produced the film with me. Here’s a brief note on the film, which runs for 52 minutes, and then more responses, and finally, here’s the trailer.

Atomic Cover-up is the first documentary to explore the bombings of Hiroshima and Nagasaki in 1945 from the unique perspective, words and startling images of the brave cameramen and directors who risked their lives filming in the irradiated aftermath. It reveals how this historic footage, created by a Japanese newsreel crew and then an elite U.S. Army team (who shot the only color reels), was seized, classified top secret, and then buried by American officials for decades to hide the full human costs of the bombings as a dangerous nuclear arms race raged. All the while, the producers of the footage made heroic efforts to find and expose their shocking film, to reveal truths of the atomic bombings that might halt nuclear proliferation. Atomic Cover-up represents, at least in part, the film they were not allowed to make, as well as a tribute to documentarians everywhere.

“One of 2021’s most important films….A devastating gut punch. It is a film of quiet and devastating power that will bend the knees of even those who think they know everything about the bombings.” – Steve Kopian, Unseen Films

“A powerful and important documentary – extraordinary use of long-suppressed footage from Hiroshima & Nagasaki after the US dropped the Atomic bomb.” – Nina Bernstein, longtime New York Times investigative reporter.

“An important work, one that’s essential education for a generation with less and less familiarity with the horror of nuclear weapons. A major contribution to our collective memory.” – Daniel M. Gold, New York Times film reviewer, 2009–2017. 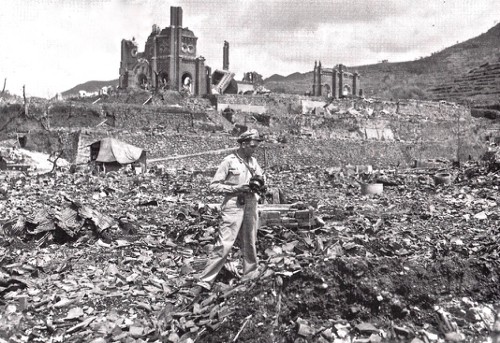 “You’ve been a real warrior on this issue.” – Oliver Stone

“A very interesting film with a very important message, and the images are really horrifying.” – Patrick Vollrath, Academy Award-nominated director of 7500.

“Chilling.” – Sharon Grimberg, director of McCarthy and producer of dozens of other films for PBS’ American Experience

“Arresting and fascinating – horrifying all over again.” – Nicholson Baker, award-winning author of Human Smoke: The Beginnings of World War II, and other books.

“The film is incredibly good. I was very moved by the story and by its urgency.” – Lyn Goldfarb, director of recent hit Edy’s World and producer of Academy Award-nominated With Babies and Banners

“So powerful” – Gary Krist, author of The Mirage Factory and other bestsellers.

“Great film!” – Anthony Weller, author of First Into Nagasaki about his father whose newspaper reports were censored and disappeared for 60 years.

“Greg Mitchell has been a leading chronicler of Hiroshima and Nagasaki, and American behavior toward them. Now he makes use of key interviews and documents to record an extremely important part of atomic bomb history that deserves far more attention today.” – Robert Jay Lifton, author of Death in Life (winner of the National Book Award) and other acclaimed books.