Yet, with all the media assets available to the Department of Defense and each of the military services, the actions of senior civilian and military leadership make it impossible for one of the world’s biggest media conglomerates to dig itself out of the hellhole of the Navy’s Red Hill jet fuel contamination of the drinking water of 93,000 in Hawai’i and lack of medical resources for those poisoned by jet fuel.

For example, on September 29, 2022, the Secretary of Defense, retired 4-star Army general, Lloyd Austin, arrived on the island of O’ahu to take a tour of the 80-year-old underground jet fuel tanks that in late November 2021 spewed for 35 hours 19,000 gallons of jet fuel down a tunnel hallway, under a raised door and directly into the Red Hill drinking water well and into a part of the aquifer of Honolulu. 93,000 persons drank water from that well. Tens of thousands were seen in emergency rooms for jet fuel poisoning. Hundreds, if not thousands, have permanently left O’ahu to seek treatment and to live in uncontaminated housing. Many families left in Hawai’i still report poor air quality and continuing sheens in their water.

Secretary of Defense Initially Not Meeting with Military Families, But Changed Mind After Publicity

Yet, according to Hawaii News Now, initially, the Secretary of Defense was NOT meeting with any of the poisoned military and civilian families during his two-day visit which included a tour of the Red Hill jet fuel tank system. After reporting that no meetings with families were planned and many residents of Hawaii talking with their Congressional representatives about the slight to families, late on September 29, the Honolulu media was informed by the Pentagon press secretary that Secretary of Defense would meet with some military families after all. However, the names of those with whom Austin spoke were not released and some are concerned that families were chosen who did not describe the dangerous conditions many families still face.

To add insult to literally injury, despite extensive medical documentation over the past ten months from military and civilian families who were subjected to jet fuel in their drinking water, senior Navy officials prior to Austin’s visit continued to maintain that there is “no evidence the contamination caused long-term symptoms.”

Even more disturbing, the September 28 broadcast of Hawaii News Now quoted US Pacific Fleet Surgeon Capt. Michael McGinnis: "We have no evidence to suggest there’s ongoing acute exposure or symptoms related to the water distribution system."

If Capt. McGinnis would listen to the daily phone calls that the Navy call center receives or would look at the Facebook posts on JBPHH Water Contamination Support, he would see that many family members are still reporting, ten months after the dumping of 19,000 gallons of jet fuel directly into the drinking water supply of twenty-five housing areas with 9,715 residences, that "clean" water in many of the housing areas is still causing rashes, nose bleeds and respiratory issues from bad air quality in the homes.

Capt. McGinnis could also read the large number of investigative media news reports from Hawai’i and nationally that for the past ten months have chronicled the plight of families who are having long term dangerous medical consequences from ingestion of jet fuel contaminated water.

For Capt. McGinnis’ benefit, here are links to the stories of just a few of the many families who have told their stories to the media:

US defense chief in Hawaii amid distrust after fuel spill

Capt. McGinnis also should watch an upcoming webinar titled "Living A Nightmare: Current Impacts of Navy Jet Fuel Poisoning O’ahu Water" on October 15 at 4pm HST with four members of families poisoned by the jet fuel. He and other senior leadership of the Navy may register here: tinyurl.com/redhilloct15 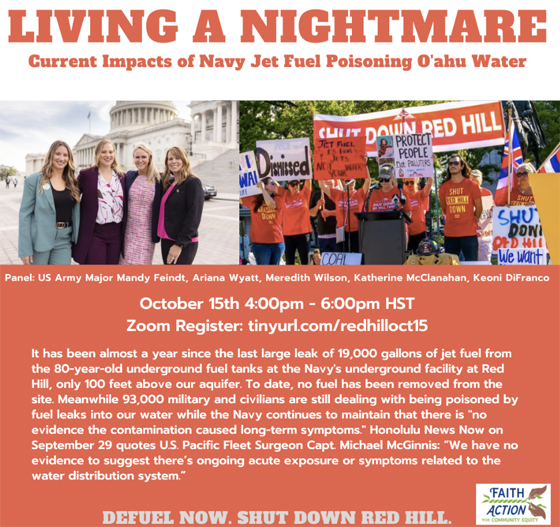 Added to the catastrophic spewing of jet fuel into the drinking water of 93,000 was the revelation on September 27 that the State of Hawaii’s Department of Health is fining the Navy $8.7 million for 766 counts of discharging pollutants from its wastewater plant in Pearl Harbor above permit limits, 17 counts involving the bypassing of water filters, and 212 counts of operational and maintenance failures. Then, one day later, on September 28, the Navy revealed that another wastewater incident had occurred with more than 1,000 gallons of wastewater spilled from its treatment plant into Pearl Harbor after a 12-inch wastewater line break.

Sailors onboard the aircraft carrier USS Nimitz are reporting the same confusing information about jet fuel contamination of drinking water faced by residents of 22 housing compounds in the Pearl Harbor/Hickam Air Base areas of O’ahu, Hawai’i.

As reported in military.com, a sailor whistleblower on the Nimitz said that the ship’s commanding officer announced to the ship on September 16 that jet fuel had been discovered in the ship’s drinking water, stressing that the crew should drink only distributed bottled water until they returned to port. Later that night, however, the 3000-member crew were told by the ship’s executive officer and the commanding officer that the water was actually safe to drink and that there was nothing to worry about. “It was not safe to drink,” the sailor said. “People believed the CO and XO, and people were showering in this stuff.”

A year earlier in Hawai’i, after complaints of drinking water smelling like fuel and sheens on the water, Navy officials originally said that testing of drinking water yielded no traces of contamination, but they later had to acknowledge there was jet fuel in drinking water. Navy Capt. Erik Spitzer, commander of Joint Base Pearl Harbor-Hickam at the time, even went so far as to tell families in a press release that he and his staff were drinking the water and that "there are no immediate indications that the water is not safe." Days later, however, Spitzer apologized profusely, telling families he had believed the water safe to drink when it was in fact not.

Sailors on the Nimitz were having some of the same initial symptoms of rashes and throwing up that Red Hill contamination residents displayed. Long term effects of gastrointestinal issues, seizures and neurological issues including balance, vision and hearing are now reported by many from the Red Hill contamination.

In a statement similar to patients’ comments from Red Hill poisoning who reported that some military medical personnel on O’ahu were not annotating on medical records that that patients were describing systems from jet fuel poisoning , the Nimitz sailor stated: “Medical was refusing to see patients or acknowledge that anything going on with patients or different sailors had anything related to the JP-5,” adding that medical staff “refused” to note the JP-5 exposure in sailors’ records.

Civil-Military Relations in Hawai’i at an All-Time Low

With all of this as background, one can imagine that civil-military relations in Hawai’i are at an all-time low. The lack of removing even one gallon of the 104 million gallons of jet fuel remaining in the tanks ten months after the November 2021 major contamination and seven months after the Secretary of Defense ordered the Red Hill facility closed and the shabby treatment of military and civilian families poisoned by the jet fuel means there is little trust from the local community toward the military hierarchy.

Perhaps reflecting a more general lack of trust in the military, military recruiting at an all-time low. The Army was 25% short of its recruitment goal for 2022, while the other military services barely made their goals. Needless to say, the treatment of poisoned military families in Hawai’i will not help with that recruiting.

The Red Hill civil-military relationship hole is deep. One way to begin digging out of the hole is to invite members of the community to be a part of the newly created Joint Task Force-Red Hill.

While Joint Task Force – Red Hill has not called for civilian community representation on the Task Force, the O’ahu Water Protectors has submitted to Hawaii’s congressional delegation a list of five citizens who have substantial knowledge of Red Hill who should represent the citizens of O’ahu during the defueling phase of the closing of Red Hill.

On September 19, 2022, US Navy Rear Admiral John Wade, the former Director of Operations (J3) for the US Indo-Pacific Command, was appointed as the head of the Joint Task Force. Two weeks later, while in Honolulu, the Secretary of Defense announced that two Brigadier Generals, neither of whom even live in Hawai’i, will be on the Task Force, one as Deputy Task Force commander while the other is being brought from his position as Joint Task Force Guantanamo prison commander!!! No mention of citizen membership on the Task Force was made.

The Red Hill hole is getting deeper!

Ann Wright served 29 years in the US Army/Army Reserves and retired as a Colonel. She was also a US diplomat for 16 years and served in US embassies in Nicaragua, Grenada, Somalia, Uzbekistan, Kyrgyzstan, Sierra Leone, Micronesia, Afghanistan and Mongolia. She was on the small team that reopened the US embassy in Kabul, Afghanistan in December 2001. She resigned from the US government in March 2003 in opposition to the US war on Iraq. Locally in Hawai’i, she is a member of Hawai’i Peace and Justice, O’ahu Water Protectors and Veterans For Peace.