Reprinted from Bracing Views with the author’s permission.

When the Soviet Union collapsed in 1991 and the Cold War ended, I heard a lot about peace dividends. It was time to become a normal country in normal (more peaceful) times, said Jeanne Kirkpatrick, an early neocon who served under Ronald Reagan. More than thirty years later, America still awaits its peace dividends from the Cold War.

When the Afghan War came to a sputtering and ignominious end in 2021, I didn’t hear much at all about peace dividends. Even though the Afghan War was costing the United States almost $50 billion a year before it crashed and burned, the Pentagon budget for 2022 went up by that amount rather than down. You’d think the end of wars would lead to a decrease in military spending, but not in America.

And so we come to today, when I learned that the Pentagon budget for 2023, which sat at $802 billion per the request of the Biden administration, has been boosted big time to $847 billion by the House and Senate Armed Services Committees. That’s $45 billion extra for more wars and weapons, a whopping sum of money that would likely end homelessness if it was invested in America. 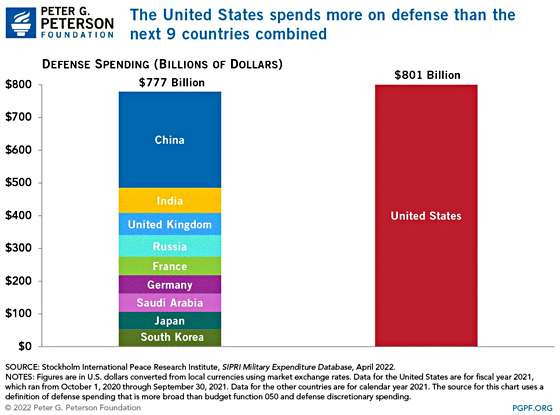 One thing is certain: war dividends always come through. Peace dividends? Not so much.

How does the Washington Beltway crowd justify such enormous sums for “national defense”? Threat inflation, of course. Because of its debilitating war with Ukraine, Russia is weaker but somehow that means America must spend more because Putin or something. Chinese maneuvers near Taiwan are treated like direct incursions into U.S. coastal waters. A few North Korean missiles are enough to justify more than a trillion dollars for new or revamped nuclear forces over the next thirty years. And of course military Keynesianism is always a factor, as in Pentagon-related jobs spread as widely as possible through every Congressional district.

The Pentagon can’t even pass an audit (for the fifth year in a row!), yet it still gets more and more billions from you the taxpayer.

I took a quick look at NBC News online to see if there were any objections to this massive $847 billion budget for the Pentagon. The only story featured warned that “GOP senators threaten to delay military bill over vaccine mandate.” Yes, what’s truly worrisome is that a few troops might have to accept a COVID vaccine against their will. Geez, where were these senators when the military was jabbing me in the arm every year with a mandatory flu vaccine?

Trees are falling in the forest to print all the money the Pentagon wants (and then some), but few Americans hear a sound since the mainstream media refuses to cover wasteful military spending and disastrous American wars.

If you should want a sure bet in America, don’t toss money at your favorite sports team. Place your bet on America’s war horse. Whether it wins, places, or shows, or even comes up lame, it will always pay dividends.

William J. Astore is a retired lieutenant colonel (USAF). He taught history for fifteen years at military and civilian schools. He writes at Bracing Views.

12 thoughts on “War Dividends: The Pentagon Budget Keeps Soaring Up, Up, and Away!”