Humanity is a mistake away from "nuclear annihilation," according to the head of the United Nations. But the Canadian government refuses to support efforts to lessen that risk. In fact, they’ve pursued policies that increase the likelihood of nuclear war.

At Monday’s opening of the review conference of the Treaty on the Non-Proliferation of Nuclear Weapons (NPT) UN Secretary General Antonio Guterres warned of the dangers of nuclear weapons. He said, "humanity is just one misunderstanding, one miscalculation away from nuclear annihilation." Numerous other prominent individuals have made similar statements and the Bulletin of the Atomic Scientists Doomsday Clock is set to 100 seconds to midnight.

The war in Ukraine has greatly increased the possibility of nuclear war. By promoting NATO expansion, the overthrow of an elected Ukrainian president in 2014 and subsequent eight-year war in the east, Canada helped precipitate the war. Since Russia’s illegal and brutal invasion, Ottawa has poured in weapons, encouraged Canadians to go fight and sent Canadian special forces. At the same time, they’ve openly opposed negotiations to end the war.

END_OF_DOCUMENT_TOKEN_TO_BE_REPLACED 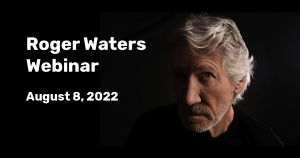 On the 8th of August at 3:00 Eastern, Roger Waters will be joined by retired U.S. Army major Todd Pierce in an event to support Wikileaks’ Julian Assange and his resistance to being extradited to the U.S. on bogus espionage charges.

The event is sponsored by:

Have we forgotten there is no safe place to hide in a nuclear war?

• Alliance for Science – What the science says: Could humans survive a nuclear war?

• International Physicians for the Prevention of Nuclear War

Every year the four-day period August 6–9 brings to mind the Hiroshima and Nagasaki atomic bombings. This year is marks the 77th anniversary of those horrific acts. Given recent U.S. withdrawal from 3 nuclear treaties and US boasting about spending a trillion dollars to upgrade our nuclear stockpile, the Bulletin of Atomic Scientists moved the Doomsday Clock to 100 seconds to midnight in 2020. That’s the symbolic closest we’ve come to nuclear winter in the entire nuclear age.

I learned of the atomic bombings 71 years ago at age 6 and have been haunted by them ever since. For the first decade afterward, I swallowed whole the US fairytale that the military and political elite were unified in dropping the bombs to prevent a US invasion and its estimate of a million US casualties.

END_OF_DOCUMENT_TOKEN_TO_BE_REPLACED

I feel for American basketball player Brittney Griner. Did she break the law? Yes, she did, and she pled guilty at trial. But a sentence of nine years – to be spent in what the New York Times calls a "penal colony" – for bringing hashish into Russia for self-treatment (assuming this is true) seems overly harsh. But the law can be an ass. If humans have sovereignty over their own bodies, then it is just plain wrong to be hassled for what one chooses to consume.

On the other hand, Griner should be accorded the same treatment from the Russian justice system as any Russian would be accorded. If this has been the case, then it can be argued that justice was meted out without favoritism in the Russian system.

Still, if it was a packing error, then Griner is paying a high price for a mistake that on its face would cause no harm to any other person.

END_OF_DOCUMENT_TOKEN_TO_BE_REPLACED

Did House Speaker Nancy Pelosi wake up one morning and say to herself, "How can I provoke war with China? Bingo, I’ll schedule a trip to Taiwan crossing a red line for China that will provoke a strong response."

How did that work out, Nancy? Let’s see. Firing missiles near their Taiwan’s border including greatly ramped up military exercises. Sanctions against Taiwanese trade. Stop cooperating with US on climate change. Cancellation of future phone calls and meetings between Chinese and US defense leaders, for which future dates had not been announced. Cancellation of annual naval meetings under the China-US military maritime consultation mechanism. Suspended cooperation on the repatriation of illegal immigrants. Suspension of legal assistance on criminal matters. Suspension of efforts to combat of transnational crimes. Suspension of its anti-drug cooperation with the US which will speed the flow of fentanyl here to kill our youth.