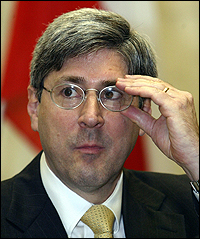 After Georgetown University decided against renewing his contract, a brief stay as a Visiting Scholar at Harvardâ€™s Kennedy School of Government, and his efforts to get a post at the Brookings Institution came to naught, former Undersecretary of Defense for Policy Douglas Feith appears to have found a new home at the Hudson Institute, another predominantly neo-conservative â€œthink tankâ€ that tends to lie in the shadow of the much more media-prominent American Enterprise Institute (AEI). According to Hudsonâ€™s latest News & Review, Feith, whose self-serving memoir, War and Decision: Inside the Pentagon at the Dawn of the War on Terrorism pretty much bombed with the few credible critics who reviewed it, will be the Instituteâ€™s Director for National Security Strategies.

Hudson, of course, was the first refuge of I. Lewis â€œScooterâ€ Libby after his 2005 indictment for perjury, but he apparently left after his conviction (and despite Bushâ€™s commutation), and Iâ€™ve completely lost track of him now. (Does anyone know what heâ€™s doing?)

Feith will join other leading Likudist lights at Hudson, including Meyrav Wurmser (wife of former Cheney aide David Wurmser), who heads the Instituteâ€™s Middle East Studies department; Hillel Fradkin; Laurent Murawiec; Anne Bayefsky; Norman Podhoretz (not in residence); and Nina Shea, among others. Itâ€™s interesting to note that the two Wurmsers, as well as Feith and another Hudson Senior Fellow, Charles Fairbanks, Jr., made up half of the eight members of the task force sponsored by the Jerusalem-based Institute for Advanced Strategic & Political Studies (IASPS) that produced the 1996 â€œClean Break: A New Strategy for Securing the Realmâ€ paper for incoming Israeli Prime Minister Binyamin Netanyahu that many analysts believe helped plant the seed for the Iraq invasion eight years later. (That alone suggests how dangerous it might be to put Feith in charge of developing any kinds of â€œstrategies,â€ as Hudson seems to have done.) The other task force members included IASPSâ€™s highly eccentric (check its website) president, Robert Loewenberg, James Colbert, then-Washington Institute for Near East Policy (WINEP) researcher Jonathan Torop; and the nominal chairman, Richard Perle, from whom not much has been heard lately â€” another sign that, with the exception of Bill Kristol, Max Boot, and the Kagan boys, neo-cons have been lying rather low during the election campaign.

Feithâ€™s former boss, Deputy Defense Secretary Paul Wolfowitz, has also not been heard from recently, which in many ways is very strange, given that his last public post was president of the World Bank and his official at AEI (where he has been a Visiting Scholar since his ignominious resignation 18 months ago) stresses his interest in development and trade. You would think that, given the current financial crisis and its potentially disastrous ripple effects on emerging economies and poor countries (for which he has expressed particular sympathy in the past), he would not have been shy about offering his advice about how to protect them. But, apart from his advocacy of business and defense ties with Taiwan (heâ€™s chairman of the U.S.-Taiwan Business Council), he seems to have largely disappeared from the public sphere. In the realm of economic development and aid, Hudson has acquired a far more credible figure in the person of former USAID Administrator Andrew Natsios, who joined the Institute at the same time as Feith.

20 thoughts on “Feith Finds a Home”