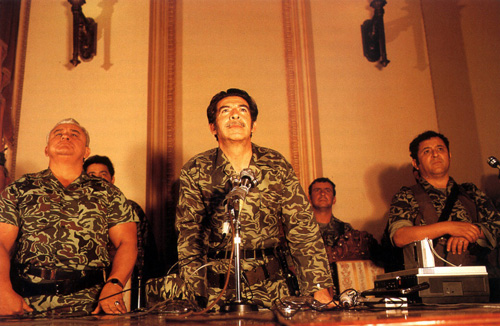 “Prosecutors allege Rios Montt, who ruled as commander-in-chief for 17 months, turned a blind eye as soldiers used rape, torture and arson against leftist insurgents and targeted indigenous people during a ‘scorched earth’ military offensive that killed at least 1,771 members of the Ixil tribe,” Reuters reports.

Rios Montt wasn’t the only one turning a “blind eye.” He came to power in a military coup and “was a close ally of Washington who received training at the infamous “School of the Americas,” writes Cyril Mychalejko. The Reagan administration…

not only covered up, but aided and abetted war crimes and genocide in Guatemala. For example, President Reagan traveled to Guatemala in December 1982 to declare that Rios Montt was getting a “bum rap”, while praising the dictator’s “progressive efforts” and dedication to democracy and social justice. Just a few days after Reagan’s presidential visit the Guatemalan military massacred 251 men, women and children in Las Dos Erres.

The United States was party to an extensive list of human rights violations and possible crimes against humanity going back to the Eisenhower administration, when in 1954 the democratically elected government of Jacobo Arbenz was overthrown in a coup orchestrated by the CIA.

The 1960-96 conflict in Guatemala, with consistent US intervention on the side of the government and paramilitary groups, saw some 200,000 people, predominantly indigenous Mayan, murdered or disappeared. The height of the bloodshed occurred under US ally and beneficiary Ríos Montt, during which the number of killings and disappearances reached more than 3,000 per month.

Montt’s forces, with the help of his chief of staff Fuentes, slit the throats of women and children, beat innocent civilians and doused them in gasoline to be burned alive, tortured, and mutilated thousands of innocent indigenous peasants. The UN commission investigating the atrocities has already concluded it constituted acts of genocide.

Montt may finally face trial. No one has dared to suggest that those in Washington who supported, and were complicit in, his crimes ought to face similar justice.