The top officials in the Bush administration were not ones to let the law get in their way. If they wanted to torture and detain people beyond what any conceivable interpretation of US law, even in Guantanamo, could allow, they were going to do it. 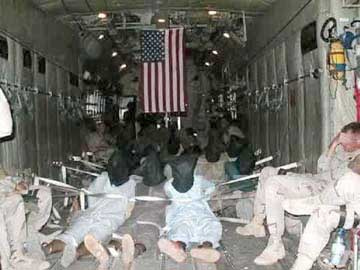 The solution, they found, was extraordinary rendition, a program where individuals were sent to other countries with unscrupulous governments so they could do the dirty work of tormenting detainees and depriving them of due process.

According to a new report by the Open Society Justice Initiative, the CIA rendered at least 136 individuals and at least 54 governments around the world participated in the program. Many of these people were completely innocent, something the CIA’s Office of Inspector General called  “erroneous renditions” in their investigation of the program.

Read of the report in the New York Times here. Read it in full here.

Below are 20 findings covered in the report, provided by Open Society:

1. At least 136 individuals were reportedly extraordinarily rendered or secretly detained by the CIA and at least 54 governments reportedly participated in the CIA’s secret detention and extraordinary rendition program; classified government documents may reveal many more.

2. A series of Department of Justice memoranda authorized torture methods that the CIA applied on detainees. The Bush Administration referred to these methods as “enhanced interrogation techniques.” “Enhanced interrogation techniques” included “walling” (quickly pulling the detainee forward and then thrusting him against a flexible false wall), “water dousing,” “waterboarding,” “stress positions” (forcing the detainee to remain in body positions designed to induce physical discomfort), “wall standing” (forcing the detainee to remain standing with his arms outstretched in front of him so that his fingers touch a wall five four to five feet away and support his entire body weight), “cramped confinement” in a box, “insult slaps,” (slapping the detainee on the face with fingers spread), “facial hold” (holding a detainee’s head temporarily immobile during interrogation with palms on either side of the face), “attention grasp” (grasping the detainee with both hands, one hand on each side of the collar opening, and quickly drawing him toward the interrogator), forced nudity, sleep deprivation while being vertically shackled, and dietary manipulation.

3. President Bush has stated that about a hundred detainees were held under the CIA secret detention program, about a third of whom were questioned using “enhanced interrogation techniques.”

4. The CIA’s Office of Inspector General has reportedly investigated a number of “erroneous renditions” in which the CIA had abducted and detained the wrong people. A CIA officer told the Washington Post: “They picked up the wrong people, who had no information.  In many, many cases there was only some vague association” with terrorism.

6. Wesam Abdulrahman Ahmed al-Deemawi was seized in Iran and held for 77 days in the CIA’s “Dark Prison” in Afghanistan.  He was later held in Bagram for 40 days and subjected to sleep deprivation, hung from the ceiling by his arms in the “strappado” position, threatened by dogs, made to watch torture videos, and subjected to sounds of electric sawing accompanied by cries of pain.

7. Several former interrogators and counterterrorism experts have confirmed that “coercive interrogation” is ineffective. Col. Steven Kleinman, Jack Cloonan, and Matthew Alexander stated in a letter to Congress that that U.S. interrogation policy “came with heavy costs” and that “[k]ey allies, in some instances, refused to share needed intelligence, terrorists attacks increased world wide, and Al Qaeda and like-minded groups recruited a new generation of Jihadists.”

8. After being extraordinarily rendered by the United States to Egypt in 2002, Ibn al-Shaykh al-Libi, under threat of torture at the hands of Egyptian officials, fabricated information relating to Iraq’s provision of chemical and biological weapons training to Al Qaeda. In 2003, then Secretary of State Colin Powell relied on this fabricated information in his speech to the United Nations that made the case for war against Iraq.

9. Abu Zubaydah was waterboarded at least 83 times by the CIA. FBI interrogator Ali Soufan testified before Congress that he elicited “actionable intelligence” from Zubaydah using rapport-building techniques but that Zubaydah “shut down” after he was waterboarded.

10. Torture is prohibited in all circumstances under international law and allegations of torture must be investigated and criminally punished. The United States prosecuted Japanese interrogators for “waterboarding” U.S. prisoners during World War II.

11. On November 20, 2002, Gul Rahman froze to death in a secret CIA prison in Afghanistan called the “Salt Pit,” after a CIA case officer ordered guards to strip him naked, chain him to the concrete floor, and leave him there overnight without blankets.

12. Fatima Bouchar was abused by the CIA, and by persons believed to be Thai authorities, for several days in the Bangkok airport. Bouchar reported she was chained to a wall and not fed for five days, at a time when she was four-and-a-half months pregnant. After that she was extraordinarily rendered to Libya.

13. Syria was one of the “most common destinations for rendered suspects,” as were Egypt and Jordan. One Syrian prison facility contained individual cells that were roughly the size of coffins.  Detainees report incidents of torture involving a chair frame used to stretch the spine (the “German chair”) and beatings.

14. Muhammed al-Zery and Ahmed Agiza, while seeking asylum in Sweden, were extraordinarily rendered to Egypt where they were tortured with shocks to their genitals.  Al-Zery was also forced to lie on an electrified bed frame.

15. Abu Omar, an Italian resident, was abducted from the streets of Milan, extraordinarily rendered to Egypt, and secretly detained for fourteen months while Egyptian agents interrogated and tortured him by subjecting him to electric shocks. An Italian court convicted in absentia 22 CIA agents and one Air Force pilot for their roles in the extraordinary rendition of Abu Omar.

17. Abd al Rahim al Nashiri was secretly detained in various black sites. While secretly detained in Poland, U.S. interrogators subjected al Nashiri to a mock execution with a power drill as he stood naked and hooded; racked a semi-automatic handgun close to his head as he sat shackled before them; held him in “standing stress positions;” and threatened to bring in his mother and sexually abuse her in front of him.

18. President Obama’s 2009 Executive Order repudiating torture does not repudiate the CIA extraordinary rendition program.  It was specifically crafted to preserve the CIA’s authority to detain terrorist suspects on a short-term, transitory basis prior to rendering them to another country for interrogation or trial.

19. President Obama’s 2009 Executive Order also established an interagency task force to review interrogation and transfer policies and issue recommendations on “the practices of transferring individuals to other nations.” The interagency task force report was issued in 2009, but continues to be withheld from the public. It appears that the U.S. intends to continue to rely on anti-torture diplomatic assurances from recipient countries and post-transfer monitoring of detainee treatment, but those methods were not effective safeguards against torture for Maher Arar, who was tortured in Syria, or Ahmed Agiza and Muhammed al-Zery, who were tortured in Egypt.

20. The Senate Select Intelligence Committee has completed a 6,000 page report that further details the CIA detention and interrogation operations with access to classified sources. However, the report itself remains classified.

92 thoughts on “20 Facts About Extraordinary Rendition, Torture, and Secret Detention”