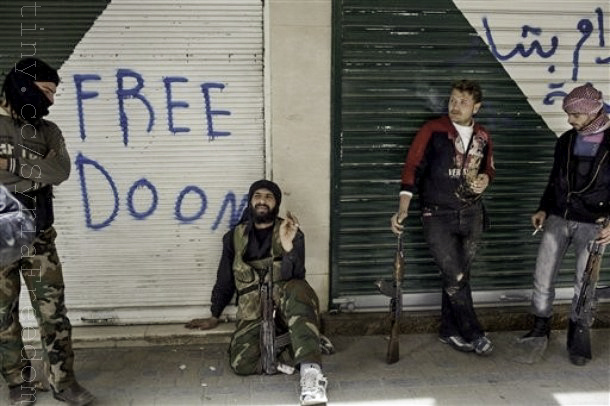 Shadi Hamid, of the Brookings Institution, thinks “we have overlearned the lessons” of Iraq and unfairly let it inform decisions about whether to intervene militarily in Syria:

The memory of the Iraq War obviously looms large. The war, itself, was one of the greatest strategic blunders in the recent history of American foreign policy. But its legacy is proving just as damaging, leading to a series of mistakes that we are likely to regret in due time. There would have been much more willingness to intervene in Syria if we hadn’t intervened in Iraq.

…As [Steven] Cook pointed out in another piece, fundamental questions of morality and philosophy are what, in part, separate proponents and opponents of intervention. “Is it a morally superior position,” Cook asks, “to sit by as people are being killed rather than take action that will kill people, but nevertheless may end up saving lives as well?” The question here, then, isn’t whether it will work, but will it be worth it?

No, the question is still whether it will work. At least that’s one question. As for Cook, his query is formulated all wrong. While it’s no fun to sit by while other people are being killed, Americans are primarily responsible for their own actions, not the actions of others. Furthermore, Cook’s moral plea rests completely on that final phrase: “may end up saving lives as well.” That’s not a very sturdy precept on which to wage war, and it presumes the US government actually cares about people being slaughtered rather than about furthering its own interests in the Middle East.

The more relevant moral and philosophical question that Hamid and Cook ought to be asking is, given the US government’s history of supporting outright slaughter in the hundreds of thousands by the worst kind of dictatorships, how can it be the proper instrument to remedy the situation in Syria?

Hamid ridicules those opponents of intervention who have asked pragmatic questions – “Today, it is fashionable to play technocrat and ask ‘what works?'” – but these are the most important questions. To not ask them, or to leave them unanswered, is to suggest the US march obliviously back into another disastrous war in the Middle East.

So what are the options for military intervention in Syria? A no-fly zone would require American airpower to disable Syria’s, but the Assad regime’s “anti-aircraft capabilities are located in or near urban areas, which means that significant civilian casualties could result from any attempt to eliminate them,” explained Marc Lynch of George Washington University in testimony before a House Foreign Affairs subcommittee back in April.

How about a so-called safe-zone? “Creating and protecting a safe area in Syria would…require a significant and lengthy investment of troops and resources, and would not likely hasten Assad’s collapse,” Lynch added.

Last month Lynch responded to proponents of intervention, like Hamid, who say the Syrian crisis could have been avoided if only Washington intervened sooner.

Advocates of intervention frequently complain that the United States could have prevented this fiasco through earlier, more forceful action. This is easy to say, but almost certainly untrue. Last year, a wide range of serious analysts inside and outside the government, including me, looked carefully at a wide range of possible military steps: no-fly zones, safe areas, bombing campaigns, arming the opposition. None could in good faith conclude that these limited military measures would lead to a rapid end to the conflict. Far from avoiding today’s tragedy, U.S. military intervention would very likely have made things in Syria worse.

Critics of the Obama administration’s approach, such as Sen. John McCain, have taken to saying that all the things opponents of intervention warned of – militarization, tens of thousands of dead, inroads by al-Qaeda affiliates – have now come to pass. This is only partially true. The U.S. military is not bogged down in another Iraq-style quagmire, steadily slipping down the slope of intervention as each limited move fails to end the conflict. There is no Pottery Barn rule dictating that Americans must prepare for a thankless and violent occupation and reconstruction. It is of little comfort to Syrians, but for the American national interest this is not a small thing.

Any kind of intervention, whether a bombing campaign or fueling a proxy war against the Assad regime, requires supporting an alternative to the Assad regime. This means throwing more support to the rebel opposition which is almost wholly made up of Sunni extremists looking to impose a harsh version of sharia law if Assad is toppled. Jabhat al Nusra, formerly known as Al-Qaeda in Iraq, has now become the foremost fighting force in the rebellion. The State Department just designated them a terrorist organization. Are these the groups Hamid thinks will bring peace and justice to Syria?

In October, The New York Times published an article confirming that “Most of the arms shipped at the behest of Saudi Arabia and Qatar to supply Syrian rebel groups fighting the government of Bashar al-Assad are going to hard-line Islamic jihadists,” despite the fact that those weapons were being sent with US approval and coordination. The evidence suggests this worsened the humanitarian situation in Syria.

Even if the opposition were not precisely the types of people Washington claims to be fighting in the war on terror, these kinds of proxy wars are never helpful. The US fueled militants in a proxy war in Guatemala for decades and ended up with something like 250,000 dead or missing. In Nicaragua, too, and about 60,000 people died in a country of only 3 million. And then there’s of course Afghanistan during the Soviet occupation, in which maybe a million people died, not to mention the fact that our “freedom fighters” later turned into al-Qaeda and the Taliban.

As Prof. Eva Bellin and Prof. Peter Krause in the Middle East Brief from Brandeis University found in their study of the Syria situation: “The distillation of historical experience with civil war and insurgency, along with a sober reckoning of conditions on the ground in Syria, make clear that limited intervention of this sort will not serve the moral impulse that animates it. To the contrary, it is more likely to amplify the harm that it seeks to eliminate by prolonging a hurting stalemate.”

These are just the beginning of the practical questions Hamid dismisses. There are many others, like, “what would come after we topple Assad?” Or, “how would such an intervention be justified under domestic and international law, especially considering Russia and China’s inevitable veto of any UN Security Council resolution pushing intervention?”

Even many in the Washington establishment oppose intervention, as Aaron David Miller wrote last month: “The idea that Syria was anyone’s to win or lose, or that the United States could significantly shape the outcome there, is typical of the arrogant paternalism and flawed analysis that have gotten this country into heaps of trouble in the Middle East over the years.”

What would a US military intervention in Syria produce? A descent into chaos and sectarianism on the order of post-Saddam Iraq. That conflict killed more than 650,000 people according to some studies and cost trillions of dollars. Thankfully, the memory of this catastrophe looms large over the Syria debate.