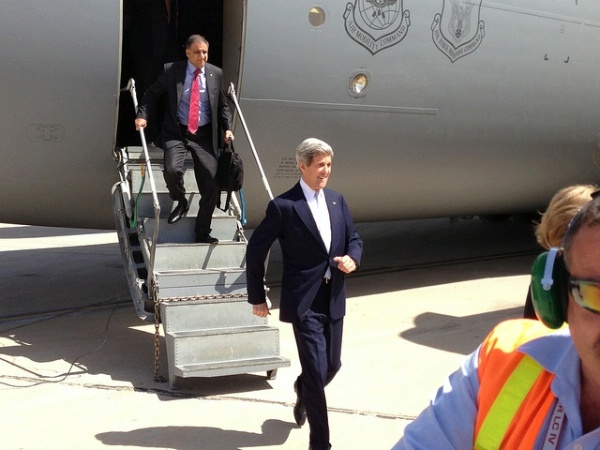 Secretary of State John Kerry went to Iraq this weekend to meet with Prime Minister Nouri al-Maliki and tersely request that he stop allowing Iran to use Iraqi airspace to send weapons and support to the Syrian regime of Bashar al-Assad. They shouldn’t be supporting one side in a civil war, Kerry insisted.

At the same time that Washington has the effrontery to make such a demand, the CIA is dramatically increasing its coordination of military aid to Syrian rebels through Arab regimes and Turkey. The New York Times:

With help from the C.I.A., Arab governments and Turkey have sharply increased their military aid to Syria’s opposition fighters in recent months, expanding a secret airlift of arms and equipment for the uprising against President Bashar al-Assad, according to air traffic data, interviews with officials in several countries and the accounts of rebel commanders.

The airlift, which began on a small scale in early 2012 and continued intermittently through last fall, expanded into a steady and much heavier flow late last year, the data shows. It has grown to include more than 160 military cargo flights by Jordanian, Saudi and Qatari military-style cargo planes landing at Esenboga Airport near Ankara, and, to a lesser degree, at other Turkish and Jordanian airports.

Even though the Obama administration publicly denounces the wisdom of sending anything but “non-lethal” aid to the mostly Sunni jihadist rebels, the Times reports, the CIA’s involvement in this secret program shows “that the United States is more willing to help its Arab allies support the lethal side of the civil war.”

From offices at secret locations, American intelligence officers have helped the Arab governments shop for weapons, including a large procurement from Croatia, and have vetted rebel commanders and groups to determine who should receive the weapons as they arrive, according to American officials speaking on the condition of anonymity. The C.I.A. declined to comment on the shipments or its role in them.

This ill-concealed hypocrisy isn’t new: it’s a replay of exactly the scenario that played out in Obama’s first term, when Secretary Clinton served the role of demanding Iraq and Iran stay out of Syria’s conflict, even as US/allied meddling increased.