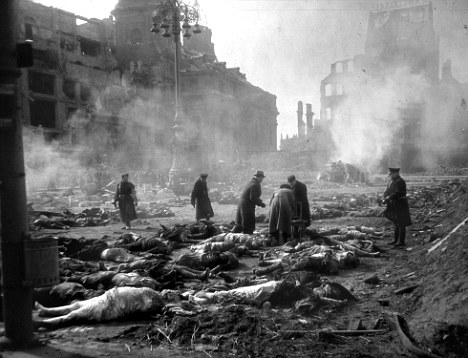 This story from Der Speigel laments German Chancellor Angela Merkel’s reverting back to Germany’s post-WWII pacifist doctrine after years of gradual “steps towards normality” – where “normality” is militarism.

On April 2, 1993, the cabinet of then Chancellor Helmut Kohl approved the Bundeswehr’s first international combat mission, allowing German soldiers to participate in monitoring the no-fly zone over Bosnia. It was the first war in which the Bundeswehr was involved in combat operations.

Bosnia marked the beginning of a long path to normalization that Germany has followed since the end of the Cold War. Today the Bundeswehr is involved in 11 missions that have been approved by the parliament. Some 6,540 soldiers are currently deployed on foreign missions in the Balkans, Afghanistan and the Horn of Africa. “The mentality of Germans has changed when it comes to the use of military force,” says Defense Minister Thomas de Maizière. “We’ve come a long way in this respect.”

Horay! How pedestrian of them to have been so timid in their resumption of militarism.

The author goes on to bemoan Merkel’s cautious tempering of military engagement. The “coalition government consisting of Merkel’s conservative Christian Democratic Union (CDU) and the liberal Free Democratic Party (FDP)” the author writes, “is in the process of dismantling the progress Germany has made in this respect.” Again, “progress” meaning shedding its aversion to militarism.

Be it out of conviction or the fear of voters, German foreign policy, under the leadership of Merkel and Foreign Minister Guido Westerwelle, has returned to its former insecurity and unwillingness to engage. From Berlin’s abstention in the UN Security Council vote on Libya to its minimal involvement in Mali and its passive approach to the conflict in Syria, the country is avoiding military involvement at all costs.

This is doing serious harm to Germany’s international reputation. The concept of a “culture of military restraint,” which the foreign minister mentions at every opportunity, is vexing to Berlin’s allies. Now that the euro crisis has catapulted Germany into the role of Europe’s leading power on economic policy, it also faces heightened expectations in other respects. The contradiction between Germany’s economic strength and its military self-doubt is bigger than ever.

Needless to say, aversion to militarism is not something to lament. I’m not an expert on German foreign policy post-WWII, but – much to the ignorance of this Der Speigel piece – it is no accident that Germany and Japan ended up with explicitly pacifist doctrines after WWII. Both countries experienced the graphic rise of amplified militarism and, more than many other countries, ended up on the receiving end of the utter destruction the war brought. That combination tends to teach a society some lessons.

Some people, however, are resistant to those lessons, believing instead that militarism – not peace – is “progress.”

47 thoughts on “Militarism as ‘Progress’”