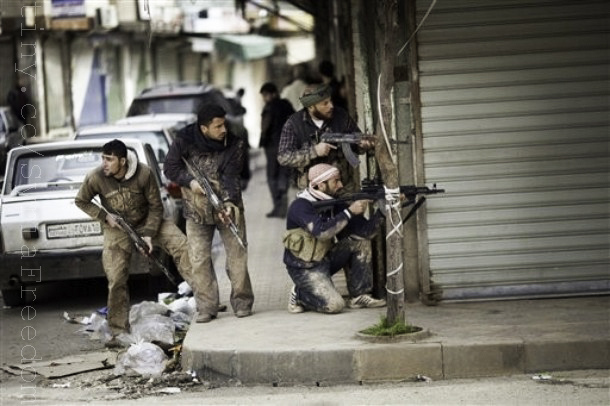 As has been widely known and reported, the CIA is facilitating the delivery of weapons to Syrian rebels from countries like Saudi Arabia, Qatar, Turkey, and Jordan. While these regimes have plenty of their own weapons on hand to send into Syria, they’ve also received some from Croatia, presumably for purposes of deniability.

As The New York Times reported, “From offices at secret locations, American intelligence officers have helped the Arab governments shop for weapons, including a large procurement from Croatia…”

Croatia has denied these allegations. But the evidence is becoming pretty clear. John Reed at Foreign Policy:

Remember how Croatia denied it had any involvement in shipping weapons to the Syrian rebels? (Despite photos of Jordanian military-owned transport planes loading up at Croatian airports.)

Well, the Organized Crime and Corruption Reporting Project has used UN trade statistics to claim that Croatia conducted the largest transfer of arms in the tiny nation’s history. In December 2012, Jordan purchased 230 tons of rocket or grenade launchers, howitzers, mortars, and plenty of ammunition from Croatia for $6.5 million. Prior to this, the Balkan nation’s largest-ever shipment of arms was 15 pistols in 2001, according to the OCCRP.

While Croatia denies any involvement in what The New York Times reports to be a CIA-facilitated, multinational arms pipeline to the Syrian rebels, numerous Yugoslav-designed weapons have appeared for weeks now in the hands of purported Syrian rebels on YouTube videos.

“Within weeks of the trade,” according to OCCRP, “powerful new weapons began appearing among Syrian rebel fighters” that “match the categories listed in the Croatian export records.”

Arms smuggling is a dirty (and often illegal) business, so it’s no wonder Croatia denies it, Arab governments are mum, and the CIA is handling this secretly. What gets lost in all this illicit trafficking and secrecy is whether or not the policy is a good idea.

There are of course two main problems with arming the rebels: (1) it amounts to support for Islamic jihadists with ties to al-Qaeda that have committed war crimes, and (2) it is not only failing to improve the situation on the ground, it is making it worse by ensuring a perpetual stalemate.

67 thoughts on “Croatian Arms and the Syrian Conflict”