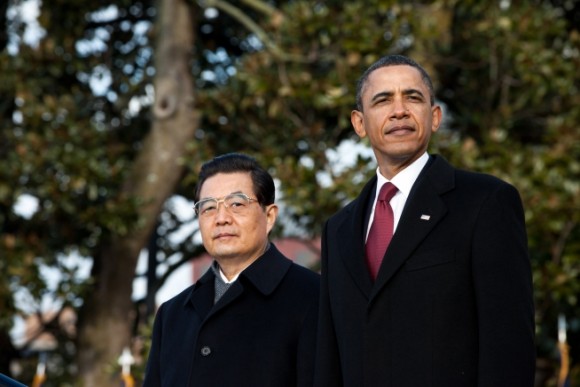 The dispute between China and Japan over territorial claims to the Senkaku/Diaoyu island chains has become the front line in the Sino-Japanese realpolitik rivalry. But it is at least as much about the geo-political contest between the U.S. and China, with Japan as a proximate instrument of American power in East Asia.

President Obama’s so-called ‘Asia pivot’ is an aggressive policy that involves surging American military presence throughout the region and backing basically all of China’s rivals in a nationalistic scheme to block China’s rise as a world power. Included in this scheme is beefing up U.S. naval presence in the region’s vital waterways and reaffirming America’s security arrangements with countries like Japan. If Japan’s security is ever threatened, say our defense treaties, America will go to war on their behalf.

This understandably rattles China. A 2012 report from the Center for Strategic and International Studies predicted, correctly it turns out, that 2013, “could see a shift in Chinese foreign policy based on the new leadership’s judgment that it must respond to a U.S. strategy that seeks to prevent China’s reemergence as a great power.”

“Signs of a potential harsh reaction are already detectable,” the report said. “The U.S. Asia pivot has triggered an outpouring of anti-American sentiment in China that will increase pressure on China’s incoming leadership to stand up to the United States. Nationalistic voices are calling for military countermeasures to the bolstering of America’s military posture in the region and the new US defense strategic guidelines.”

And America’s role in Sino-Japanese tensions became even more explicit with news today that Japan lodged a diplomatic protest after Chinese state media “published a commentary by two Chinese government-backed scholars who said ownership of the Ryukyu islands should be re-examined,” Reuters reports. The Ryukyu islands are separate from the Senkaku/Diaoyu dispute, resting further northeast. Importantly, the Ryukyu islands include Okinawa, the location of the biggest U.S. military base in all of Japan, holding about 50,000 U.S. military personnel.

The controversy prompted an ostentatious exchange:

Japan’s Chief Cabinet Secretary Yoshihide Suga told a regular briefing in Tokyo on Wednesday that the islands were Japanese territory.

“Japan lodged a stern protest that we can by no means accept the article in question if it reflects the Chinese government’s stance,” Suga said.

China had responded to Japan by saying that the piece was written by scholars as individuals, Suga said.

The Chinese scholars claimed the Ryukyu islands were a “vassal state” of China’s Ming and Qing dynasties before they were annexed by Japan. Whether that has any legitimacy whatsoever, I don’t know. But it is probably not so coincidental that the conspicuous claim to even more territory long claimed by Japan also holds 50,000 U.S. military personnel.

The attempt by the United States to debilitate China for the sake of its own global hegemony has predictably emboldened China. Beijing and Tokyo have nearly come to blows in the recent past over conflicting territorial claims, but only after being inflamed by the U.S.-China rivalry in the background.

Late last year, a Chinese think-tank predicted that military conflict between China and Japan might be inevitable, thanks in part to US meddling in the Asia-Pacific region.

As for the Senkaku Islands, the report explained that Japan’s right-wing groups, which have gained strength through the country’s two decades of a sluggish economy called “the lost 20 years,” regarded U.S. policy of “pivoting to Asia” as the best opportunity to nationalize the islands. In September, Japan purchased three of the five Senkaku Islands, called the Diaoyu Islands in China, from a private landowner.

…“Japan’s nationalization of the Diaoyu Islands destroyed the framework for keeping a balance, which means ‘shelving a conflict,’ ” a Chinese diplomatic source said.

A veteran Chinese diplomat warned back in October that the US is using Japan as a strategic tool in its military surge in Asia-Pacific aimed at containing China and is heightening tensions between China and Japan. Chen Jia, who served as an under secretary general of the United Nations and as China’s ambassador to Japan, accused the US of encouraging a militaristic response by Japan. “The US is urging Japan to play a greater role in the region in security terms, not just in economic terms,” he said.

The U.S. shouldn’t have a military presence in Japan and shouldn’t be subsidizing Japanese defense. Washington has kept up its massive military presence throughout East Asia in order to keep geo-political rivals weak and maintain its own dominance. U.S. troop presence doubly antagonizes China in the already threatening context of Obama’s Asia-Pivot and U.S. meddling in the peculiar territorial disputes in the region that are none of America’s business only makes things worse, while giving Washington an excuse to police that part of the world just as it tries to do so in the rest of the world.