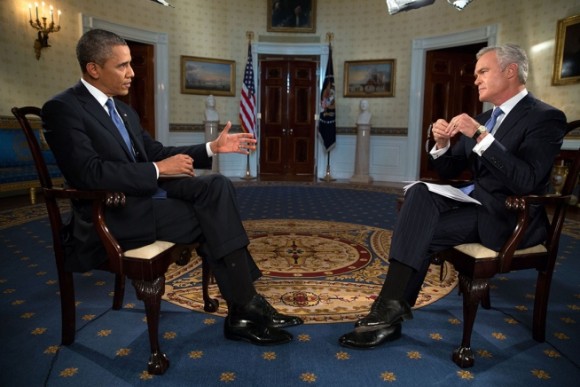 In most cases throughout Obama’s presidency, I’ve hesitated to criticize the administration for incompetence or ineptitude. In his famously deliberative style, I’ve typically believed President Obama to be cold and calculating in his ruthless and extra-legal drone war. He has been thoughtful in crafting and executing his military expansionism in Asia aimed at containing a rising China. In Obama’s unprecedented crackdown on whistleblowers, his despotic use of the Espionage Act, his dramatic swelling of the surveillance state – the president has been severe, unlawful, even dishonest, but seemingly adept.

I can’t say the same for what has happened the past few weeks with Syria. From the moment news hit of the alleged chemical weapons attack on August 21, Obama has been a fumbling, klutzy, shortsighted picture of incompetence. The administration announced an imminent attack on Syria after crossing his ill-conceived “red-line” and moved naval warships to the Mediterranean ready to hit targets in and around Damascus. Then he waited for Britain’s show of support, which he didn’t get. He failed to communicate any persuasive message to any allies and thus had zero international backing. He also lacked backing from the military and intelligence community, as Americans found out through the newspapers. The war plans made little sense to people: it’s a strike to punish but not topple Assad, it’s to uphold the ban on chemical weapons use but it’s not a humanitarian intervention to save the Syrian people, it’s a limited mission that won’t draw us into another quagmire but we aren’t entertaining any contingency plans for reaction, retaliation, and asymmetrical warfare in response.

So he went to Congress, which thankfully stalled and deliberated and failed to give the president the immediate political support he expected. Still, the administration publicly repeated that the president had the authority to strike without Congress, despite leaks to the press that said he didn’t intend to do so.

Then John Kerry, Obama’s secretary of state and war-monger in chief, let slip a sarcastic remark in a press conference about what Assad would have to do to avert a U.S. strike. Intending to construct a scenario so unlikely that it would highlight Syria’s intransigence, Kerry said Assad would have to hand over his chemical weapons stockpiles to the control of the international community. Only then would the U.S. consider not bombing. To John Kerry’s embarrassed surprise, Russia said it would urge Assad to do exactly that. Kerry demurred, insisting his comments were rhetorical, not a legitimate diplomatic proposal. But then Syria indicated its willingness to go ahead with this plan if it would “prevent American aggression.” Later that day, Obama went on six cable news stations and said he’d be willing to see this plan through, because he’s always wanted a peaceful resolution instead of war.

The whole process has been a parade of uncoordinated, amateurish, bungled foreign policy-making, unsure of itself the entire way. But I guess mismanagement without war is better than mismanagement after it starts.

That is not to say the party of gaffes, errors, and dangerously improvident Obama administration war games is over. With this level of incompetence, anything might happen that could put the U.S. back on the unnecessary-war-path. But a U.S. strike, deemed so imperative and unavoidable just days ago by the maladroit John Kerry, is at least stalled.

Daniel Drezner at Foreign Policy advises the Obama administration to view this accidental diplomatic deal “a foreign policy gift from the gods.” It could potentially rescue them from the doomed war box they idiotically constructed for themselves, he argues. That said, if the deal is successful, it staves off this current crisis of an apparently impending U.S. military strike on Syria. But the civil war goes back to what it was pre-August 21. The U.S. and its allies will go back to encouraging the rebel opposition and the Russians and Iranians will continue to carefully back the Assad regime, and Syria will continue to destroy itself. And that leaves room for all the more incompetence down the road.