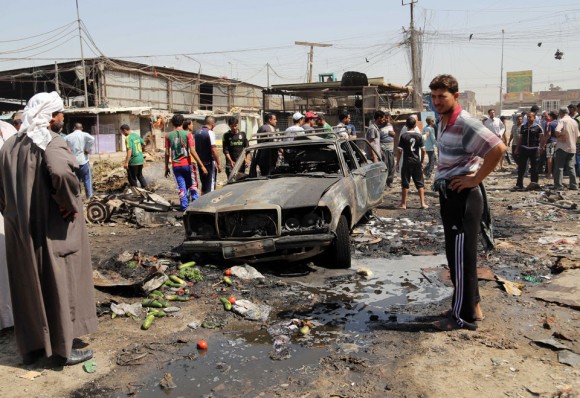 Children tend to have a tough time focusing on too many ideas at once. The same goes for adults who have the brain capacity of children.

Syria stories obviously soared in the media over the past month, and rightly so given that the Obama administration was going drag the U.S. into another unnecessary war based on false pretenses. Iran, too, has shot up in the body of international stories the U.S. media is covering, given new developments towards a possible diplomatic settlement to long simmering tensions. And again, rightly so.

But two big issues sometimes seems like the upper limit of how many separate ideas the major media can juggle at one time (unless of course we’re talking about celebrity gossip, the Michael Jackson death trial, and whether hot tubs can make you infertile).

Here’s what brought on this rant…

987 civilians have been killed in #Iraq so far THIS MONTH.

Yousef Munayyer is Executive Director of The Palestine Center and he lists these facts about Iraq, I suspect, in order to highlight how much chaos is still ongoing in the country that the U.S. needlessly and criminally tore apart for the past two decades.

One of the reasons it is really important to cover the ongoing violence in Iraq and its larger context of U.S. policy is because the myth of the success of “the surge” is still being peddled, particularly on the right. Senator John McCain, you’ll remember, excoriated Chuck Hagel during his confirmation process for at one point criticizing the surge in Iraq as potentially “dangerous.” He and others have had the gall to scream at people for dissenting on the surge religion even while Iraqis are dying in “numbers not seen since the bloody days of 2004,” as Kelley Vlahos wrote in these spaces last month.

Not only is Iraq on the verge of all out civil war, but the U.S.-backed Shiite government in Baghdad is increasingly authoritarian and is contributing to the country’s ongoing demise. The Sunni-Shia violence in Iraq is, as the International Crisis Group (ICG) puts it, “as acute and explosive as ever” primarily because “Prime Minister Nouri al-Maliki has implemented a divide-and-conquer strategy that has neutered any credible Sunni Arab leadership.”

Maliki has had his security forces detain and brutally torture thousands of political opponents in secret prisons and denied them access to legal counsel. Amnesty International reported this week that Iraq executed 13 men following unfair trials plagued by allegations of torture. “Iraq is one of the world’s most prolific executioners,” the report states.

So, the U.S. waged war against Iraq in 1991 and followed up with more than a decade of sanctions that decimated the country and was described by one UN official as genocidal. Then the U.S. invaded and occupied the country in a war of choice based on lies, ripping what was left of the country to shreds in the process. And now U.S. troops have left and Washington continues to send  about $2 billion, not including the additional billions of dollars worth of military training and equipment, to the corrupt and authoritarian regime in Baghdad that is driving the country into civil war.

How can decent Americans ignore this?

33 thoughts on “The Surge Didn’t Work, Or How Can We Continue to Ignore Iraq?”