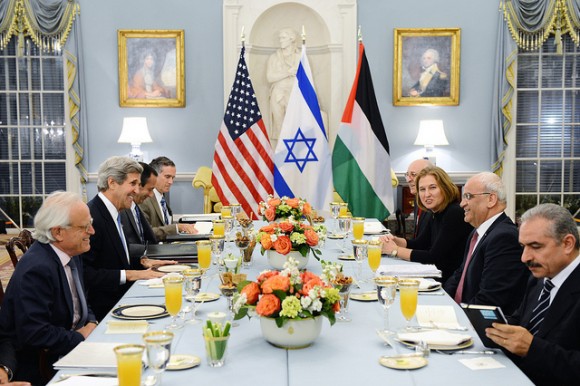 In negotiations with Israel and the U.S., the Palestinians threw down their wildcard this week. When the U.S. and Israel had essentially agreed upon an interim deal that was ludicrously one-sided in favor of Israel, the Palestinians announced they were moving ahead with the one thing that would have been prohibited in interim deal: pursuing further UN recognition.

As always, this will be branded as sabotage by the intransigent Palestinians. Like in the negotiations toward the very end of the Clinton administration, the myth that Yassir Arafat rejected “the best deal he was going to get” and abandoned the talks was propagated to no end, despite it being untrue.

According to the New York Times, the PLO made the provocative announcement to pursue further recognition at the UN “not to derail the peace process,” given that they are still technically in talks for another month or so and that the latest PLO statement says they “remain committed” to the talks until their scheduled end on April 29.

Critically, the interim deal would not have called on Israel to freeze settlement building. The PLO’s announcement could be a bargaining chip to alter the interim deal and pressure Israel to agree to a settlement freeze. This is extremely unlikely, given the apparent refusal of Washington to demand Israel stop building illegal settlements as part of a gradual annexation of the West Bank.

Israel and the U.S. have predictably condemned the PLO move. But this is what happens when you conduct negotiations in which one side has all the power and influence, and the other is kicked to the curb.

It’s hard to be optimistic about the future of these talks. According to Barak Ravid at Haaretz, the details of the interim agreement were just a bunch of “acrobatics” that “were intended to buy more time for sterile talks that are going nowhere.” There are all kinds of commentators trying to be diplomatic and blaming both Netanyahu and Abbas, but talks are “going nowhere” fundamentally because the right-wing leadership in Israel refuses to cede the West Bank to the Palestinians and, plainly, will do anything to prevent a Palestinian state.

19 thoughts on “The Monkey Wrench in Israel-Palestine Talks”