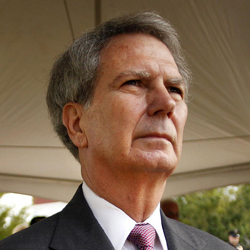 Rep. Walter Jones, one of the most consistently antiwar members of Congress, is gravely ill and has entered hospice care.

The Republican lawmaker has been battling ailments in recent months. He was granted a leave of absence from Congress in late 2018 after missing a number of votes. Jones, 75, suffered a broken hip at his home on Jan. 14. He underwent surgery at Vidant Medical Center in Greenville the following day, his office said.

Jones was originally a strong supporter of the 2003 invasion of Iraq. In fact, Jones became well known for leading the effort to have french fries renamed “freedom fries” in House cafeteria menus as a protest against French opposition to the invasion.

By 2005, Jones had reversed his position on the Iraq War. Jones called on President George W. Bush to apologize for misinforming Congress to win authorization for the war. Jones said, “If I had known then what I know today, I wouldn’t have voted for that resolution.”

Jones went on to become one of the most antiwar members of Congress, fighting for ending US involvement in Afghanistan, Syria, Libya, and Yemen.

Jones also became a regular donor to Antiwar.com and contributed to the Antiwar.com blog. Jones has often made surprise phone calls to me and to news editor Jason Ditz to praise our work and to thank us for helping to “see the light” on issues of national security.

Everyone at Antiwar.com wishes Congressman Jones well and pray for his recovery.