Yesterday was a very important day.

It’s the day the America First movement exiled the most despicable, most debased Swamp Monster on Capitol Hill.

Yesterday Liz Cheney lost renomination for Congress after three terms of using and abusing the people of Wyoming.

The reason is simple: voters are tired of fighting endless wars.

They’re tired of spending trillions of dollars in the Middle East and Central Asia while they struggle to fill their own gas tank or complete a grocery shopping list.

They’re tired of seeing their sons and daughters in uniform come home physically, mentally, and spiritually broken by war.

Or often, not come home at all.

Liz Cheney has been a face of the War Party for years.

END_OF_DOCUMENT_TOKEN_TO_BE_REPLACED

The Defend the Guard Act is state-based legislation which would prohibit the deployment of a state’s National Guard units into active combat without a declaration of war by Congress, as required by Article I, Section 8 of the U.S. Constitution. As of February 14 it has been sponsored in eleven states for the 2022 legislative session, and is on track to be introduced in over forty states by the end of the year.

"For over 25 years Antiwar.com has reported on the proliferation of endless, undeclared war in the Middle East and around the world," said Garris. "I believe one of the most effective ways of stopping these unconstitutional wars of choice is through ‘Defend the Guard’ legislation. It is the responsibility of states to stand up to the federal government and tell DC that the National Guard will not be sent to war until Congress declares it."

END_OF_DOCUMENT_TOKEN_TO_BE_REPLACED

(Boise, Idaho) – Today Bring Our Troops Home, a national organization of Global War on Terror veterans, called on Wyoming Representative Liz Cheney to stop using the U.S. Constitution "as a media prop" and support congressional war powers as stated in Article I, Section 8.

"It is time for Liz Cheney to either put up or shut up. In a weak attempt to defend herself after the Republican National Committee rebuked her, Cheney tried to claim she was standing on constitutional grounds. It is a lie," said Sgt. Dan McKnight, Chairman of Bring Our Troops Home.

END_OF_DOCUMENT_TOKEN_TO_BE_REPLACED

Today BringOurTroopsHome.US, a veterans advocacy organization composed of former soldiers of the Global War on Terror and their civilian allies, praised the renewed attention from Congress on the issue of war powers, while simultaneously noting that the effort does not go far enough in returning the United States to a constitutional foreign policy.

Last week, Senators Tim Kaine (D-VA) and Todd Young (R-IN) jointly introduced bipartisan legislation to repeal the Authorizations for Use of Military Force (AUMF) passed by Congress in 1991 and 2002 regarding military operations in Iraq. “Congress has been operating on autopilot when it comes to our essential duties to authorize the use of military force,” Senator Young said. “The fact that authorities for both of these wars are still law today is illustrative of the bipartisan failure of Congress to perform its constitutionally-mandated oversight role.”

END_OF_DOCUMENT_TOKEN_TO_BE_REPLACED 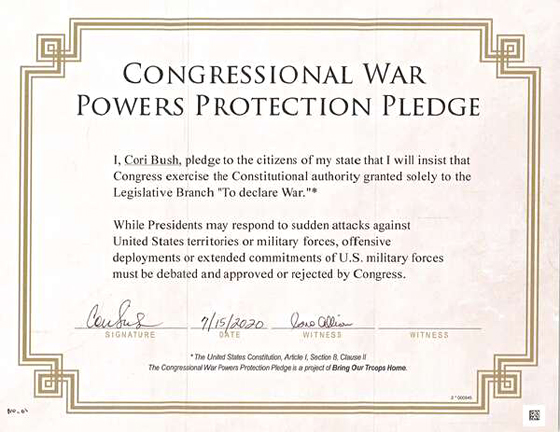 END_OF_DOCUMENT_TOKEN_TO_BE_REPLACED

WEST CHESTER, PA. — Silicon Valley’s selective censorship of news stories isn’t limited to just the U.S. presidential election, a right of center veterans group said Monday. YouTube and Google platforms are violating the free speech rights of an Afghanistan and Iraq war veterans organization, a veteran and the group’s founder said, by refusing to allow online promotion of its video honoring a U.S. Marine two-time Medal of Honor recipient and urging an end to U.S. military involvement in “endless wars” in the Middle East.

Dan McKnight, a Marine and U.S. Army veteran who served with the Idaho Army National Guard in Afghanistan and founded the veterans group BringOurTroopsHome.US, said the right-of-center group’s 13-minute video recorded last Monday at the grave site of Maj. Gen. Smedley Butler, USMC, marking the 19th anniversary of the first U.S. troops landing in Afghanistan in 2001, is being “censored” by YouTube and Google, which he accused of erroneously labeling the video “election year advertising.”

“YouTube and Google censors are clearly violating our free speech rights,” McKnight said, “the very thing General Butler and every other American who’s worn the uniform swore an oath and was willing to fight to protect. We’ll fight to protect those rights in court now if necessary.”