Turkey seeks to arrest star as ‘terrorist’ for Gulenist ties

Boston Celtics Center Enes Kanter confirmed today that he will be in Toronto for the Christmas Day game, the result of assurances from Canadian officials that he would be safe to come to Canada and participate in the game.

This was no guarantee. The 27-year-old Kanter has missed multiple games outside of the US in the past couple of years, the result of fears for his safety because of hostility from Turkey’s Erdogan government. Kanter is a supporter of banned cleric Fethullah Gulen, and his family was targeted in the post-coup purges of Gulenists by Erdogan.

All of this has made Kanter persona non grata in Turkey. His passport was cancelled, and the Erdogan government has an outstanding arrest warrant for him as a “terrorist.” Other noteworthy Turkish basketball players have been deeply critical of him, and Kanter says he considers himself “stateless” at this point because of Turkish threats to revoke his citizenship.

Kanter famously missed a game in London while a member of the New York Knicks over security concerns, and also has missed games in Toronto for the same reason. He says Turkish goons have repeatedly harassed him even in Boston, and has claimed Turkish ministers have come to the US and told allies to limit his activities in the US.

While we don’t know the exact details of what was agreed to, Kanter credited US and Canadian officials, along with the Celtics and the NBA for getting some sort of a deal done where he is confident enough of his ability to safety go to Toronto on Christmas, play a game, and return to Boston afterwards, that he is going to participate.

In a last minute move that threatens to severely handicap the Iranian team at the 2018 World Cup, Nike has announced that they are taking away their shoes, saying no Iranian players can be allowed to wear the shoes of a US company because of sanctions. 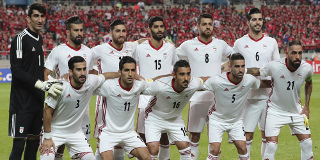 Iran’s coach is protesting the move to FIFA, noting that players have been practicing with the Nike shoes and will now have to get used to an entirely different type at the last minute. It is unclear where Iran will get these last minute shoes from.

END_OF_DOCUMENT_TOKEN_TO_BE_REPLACED

Better dead than red? According to Ukrainian officials, that’s a choice that their fiercely loyal military dolphins faced in 2014, when Russia annexed the Crimean Peninsula and took the dolphins into custody.

The Ukrainian story would have you believe that even though the Russians in Crimea had the proper command whistles for the dolphins, they were so despondent to be taken by Russians they all went on a hunger strike, and starved to death en masse.

Russia’s story is quite a bit different, noting that the dolphins had been “demilitarized” long ago and didn’t care who was feeding them. They say the dolphins were sold off to commercial interests almost immediately, and aren’t in Crimea anymore.

Both the US and Soviet Union engaged in the training of military dolphins during the Cold War, and the Crimea dolphins were what was left of the Soviet program. A US facility for dolphins is still operated in San Diego, now the last site of militarized dolphins in the world.

That the dolphins went from Soviets to Ukrainians to Russians to private industry dolphins was almost certainly lost on them. Ukraine’s story seems designed both to portray the dolphins as fiercely loyal to the military oath, and Russia as so uniquely evil that even dolphins could sense it, and rebelled instinctively. There’s no good evidence for either, of course.

WASHINGTON, D.C. – U.S. Senator Tim Kaine, a member of the Senate Armed Services and Foreign Relations Committees, released the following statement today announcing his support for the joint resolution to direct the removal of U.S. armed forces from hostilities in Yemen that have not been authorized by Congress:

“The civil war in Yemen has led to a devastating humanitarian crisis – more than 10,000 civilians have been killed and millions of Yemenis are on the brink of famine. In support of the Saudi-led coalition, the U.S. has stumbled into yet another war without a clear strategy or end in sight. I support the Sanders-Lee-Murphy proposal because I am concerned about continued U.S. involvement in Yemen against the Houthis. Our priority must be ending this conflict through a peace process and focusing on al-Qaeda and ISIS.”

END_OF_DOCUMENT_TOKEN_TO_BE_REPLACED

Attending a high-profile security conference in the Bavarian city of Munich forced Iranian Foreign Minister Mohammed Javad Zarif, and the German Defense Ministry, to take extreme measures to facilitate his arrival and departure.

Zarif was warned by the private companies that operate Munich Airport that they would refuse to refuel his official jet to make the return trip after the conference was over, citing fear the US would punish them for doing so. They suggested that he either bring a plane that could carry enough fuel for the round trip, or instead fly to Vienna, Austria and then drive the 400+ kilometers to Munich for the conference, since Vienna’s airport is run by a different company.

Option three, it turns out, was for Zarif to petition the German government about the problem, and the solution ended up being that the German Defense Ministry agreed that the German military would be in charge of refueling Zarif’s plane for the sake of departing Munich, as they apparently do not fear US reprisals.

All’s well that ends well, but this once again underscores that the US is acting in such bad faith with respect to obliged sanctions relief for Iran that airports nowhere near the US are afraid to refuel official Iranian planes who are invited for major international events.

Iran has been going through this problem virtually from the start of the P5+1 nuclear deal, with European banks fearing financing perfectly legal business deals between Iran and EU companies because they think the US will take revenge on them for doing business with the Iranians. Though publicly US officials have at times denied pressuring EU banks about this, at other times Treasury officials have bragged about how limited Iran’s access to international commerce remains, despite the supposed sanction relief. This incident just adds to Iran’s grievances about the way the deal is being handled, grievances which are largely shared by the EU parties to the deal, whose companies are losing out on lucrative business ties because of US acrimony.

US Sanctions Likely Preclude Them Getting Uniforms

When the US and UN try to impose new sanctions on North Korea, as they do every few weeks, the question that inevitably rises is: what’s left to sanction. The Winter Olympics are underscoring just how far this has already gone.

Just participating in the hockey event is a challenge. North Korea is forbidden, by UN sanctions, from buying hockey sticks, because they’re “recreational sporting equipment.” In past events, North Korean participants have had to borrow all sticks, and return them before leaving.

But that’s just the tip of the iceberg. North Korea also has to find a third party to supply uniforms for them, because the uniform sponsor, Nike, is afraid that doing business with them will violate US sanctions.

Across North Korea’s participation, this is a recurring problem. The singers and dancers they agreed to send are coming by ship, but the ship may not have enough fuel. Buying fuel would be in violation of the sanctions, so the ship is stuck en route.

Samsung is giving all the Olympics participants Galaxy Note 8 phones, but some are claiming they count as “dual use” because of their processing power and GPS capabilities. The suggestion again is North Korea might be forced to give phones back at the end of the event.

Olympic games are meant to be a time to emphasize international cooperation, and while North Korea’s involvement started as an exemplar of sports diplomacy, increasingly it underscores just how obscene the anti-North Korea sanctions already are, and how petty they’ve become.