The song was initially produced for a rally and demonstration in the San Francisco Bay Area. The event will be on October 8.

A professional recording can be listened to and downloaded here.

Last week (June 8-10) there were two summits in Los Angeles, California: the Summit of the Americas hosted by the US State Department and the Peoples Summit hosted by US and international activist organizations. The two summits were held in the same city at the same time but could not be otherwise more different.

Summit of SOME of the Americas

Begun in 1994, in the heyday of US international dominance, the Summit of the Americas is officially a function of the Organization of American States. It is meant to coordinate and consolidate US economic, political and cultural interests. The first summit, held in Miami, served this goal well. The Soviet Union had broken up, severely hurting allies such as Cuba. Neo-liberalism was on the march, even in countries such as Nicaragua where the Sandinistas had been voted out of power. The US had recently invaded Panama, making an murderous example of any country or leader that defied US dictates.

Since 1994, there have been Summits of the Americas every three or four years. The summits in Canada (2001) and Argentina (2005) had large anti-summit protests against capitalist globalization. In Panama in 2015, Cuba was invited to the summit for the first time after a group of countries threatened to boycott the summit if Cuba was again excluded. President Obama met and shook hands with Cuban President Raul Castro. There was widespread agreement and pleasure at the US beginning to normalize relations with Cuba.

END_OF_DOCUMENT_TOKEN_TO_BE_REPLACED

US media and politicians have condemned the November 7 Nicaragua election as a "fraud" and "sham". On the day of the election, the White House issued a statement saying Nicaragua held a "pantomime election that was neither free nor fair, and most certainly not democratic."

But are these accusations true?

Along with other international volunteers, I was an eyewitness to the election last Sunday. Previously I have been an observer in elections in neighboring Honduras. Here is a snapshot of what I saw:

Our group of 6 people (two from Canada and four from US) visited three voting centers and twenty voting stations in the small city of Juigalpa in Chontales province.

END_OF_DOCUMENT_TOKEN_TO_BE_REPLACED

A coalition of North American human rights organizations has released a report on the impact and consequences of US sanctions. The report is based on wide-ranging research and interviews with citizens in countries which are suffering under US sanctions.

The report reveals a reality which western media rarely or never reports.

One finding is that US sanctions hurt the poor, have resulted in thousands of deaths and “humanitarian exemptions” do not work. Another finding is that more than 70% of the world nations officially condemn US sanctions as violating international law and the UN Charter.

A free PDF copy of the report can be downloaded from www.sanctionskill.org/impact/.

The report will be distributed at the United Nations and to US Congressional offices. We encourage social justice, human rights, and legal organizations to study and take up this issue. The 35-page report, with its extensive references, is appropriate for college courses.

The two ambassadors have a common surname but dramatically different perspectives. This article will compare the statements and viewpoints of the two diplomats.

Peter Ford trained as an Arabist and served in the British foreign service in numerous cities including Beirut, Riyadh, and Cairo. He was Ambassador to Bahrein from 1999 to 2003, then Syria from 2003 to 2006. From 2006 until 2014 he was a senior officer with the UN Relief Works Agency for Palestinian Refugees.

The interview with UK Amb. Peter Ford (PF) shows why he is exceptional former diplomat. He analyzes and criticizes western aggression against Syria.

END_OF_DOCUMENT_TOKEN_TO_BE_REPLACED 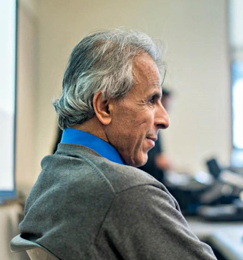 Hisham Ahmed was born in Deheisheh refugee camp on the outskirts of Bethlehem, Palestine in 1963. Blind from birth, Hisham somehow surmounted all odds and ultimately earned a PhD from the University of California at Santa Barbara. He taught for many years at Birzeit University in Palestine, before coming to Saint Mary’s College of California in 2006. He died of cancer in July 2019, age 56. The following remembrance was given at his memorial service held on 25 September 2019 at St. Mary’s College.

Sometimes you meet someone who is unforgettable. Hisham Ahmed was such a person.

I recall the first time I met him. It was about twelve years ago, soon after he came to the Bay Area. He was speaking about the reality of Palestine before a big crowd. The other guest speaker was the Jewish American activist Anna Baltzer. I remember him with his Braille computer, reading his prepared speech as his fingers slid across the computer which he kept by his side, supported by his shoulder strap.

That scene of Hisham with his computer and shoulder strap became very familiar. Hisham was always willing to speak at our events, never asking for anything in return. He was an important part of our community outreach and education about Palestine and the Middle East. We were especially happy when he agreed to join the board of the Mt. Diablo Peace & Justice Center. He immediately made a mark with his positive suggestions and ideas. He was that kind of person.