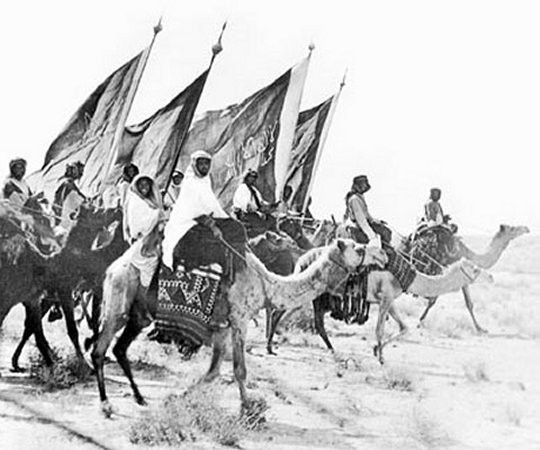 As the new war on ISIS widens, and the media war drums pick up the tempo, some nice breaks in the rhythm have been the few peeps made about the role of the U.S. and its allies (especially Saudi Arabia) in feeding the beast, by arming and training ISIS’s fellow travelers and prospective members in Syria.

Yet, this is no new phenomenon. Less-than-pious rulers (especially American presidents and decadent Saudi royals) have cynically harnessed radical Islam to fuel their worldly wars of conquest and dominance for centuries. And they have done so with the indispensable help of radical Islamic scholars, clerics, and preachers who formulate and communicate the doctrines that underpin that fanaticism.

This partnership is the most ancient variety of a more universal one: what Murray Rothbard called, “the State’s age-old alliance with the Court Intellectuals who weave the apologia for State rule.” Rothbard wrote:

“…since the early origins of the State, its rulers have always turned, as a necessary bolster to their rule, to an alliance with society’s class of intellectuals. (…) The alliance is based on a quid pro quo: on the one hand, the intellectuals spread among the masses the idea that the State and its rulers are wise, good, sometimes divine, and at the very least inevitable and better than any conceivable alternatives. In return for this panoply of ideology, the State incorporates the intellectuals as part of the ruling elite, granting them power, status, prestige, and material security.(…)

Before the modern era, particularly potent among the intellectual handmaidens of the State was the priestly caste, cementing the powerful and terrible alliance of warrior chief and medicine man, of Throne and Altar. The State “established” the Church and conferred upon it power, prestige, and wealth extracted from its subjects. In return, the Church anointed the State with divine sanction and inculcated this sanction into the populace.”

The ideological roots of ISIS, Al Qaeda, and the current wave of Islamic fanaticism in general can be traced back to the 18th century, to one particular, “terrible alliance of warrior chief and medicine man, of Throne and Altar,” that serves as a textbook illustration of the explosive power of this kind of partnership. END_OF_DOCUMENT_TOKEN_TO_BE_REPLACED

The Cato Institute’s Malou Innocent, writing at the National Interest‘s Skeptics blog, directs us to a Wikileaks-released diplomatic cable detailing Saudi Arabia’s plan “to build, own, and operate a pipeline that bypasses the straits of Hormuz—and hence, the Islamic Republic of Iran” with the only remaining obstacle being “Yemeni President Ali Abdullah Saleh.”

The cable reads, in part:

This makes it clear that there is probably a lot more going on under the surface in Saudi Arabia’s (and in conjunction, U.S.’s) holding of Saleh in Saudi Arabia, despite being released from the hospital (the reason for his presence there). Saleh, it seems, has been prevented from returning to Yemen to continue his rule. Both the U.S. and Saudi Arabia have been helping to prop up Saleh’s regime for years, but the U.S. has called for his resignation since widespread anti-government protests in Yemen nearly killed him. And apparently, the two regional superpowers want him out, and to control who succeeds him, for very different reasons than have been reported. The aim is to make Yemen a more obedient vassal state, not to earnestly respond to country-wide protests against Saleh’s rule.

Bypassing the Straits of Hormuz would be a strategic win for the U.S. and Saudi Arabia, further isolating Iran and ensuring more direct control of the flow of oil.