It’s the sort of bureaucratic lying-by-obfuscation below which caused the U.S. to unnecessarily nuke Japan twice in three days, attack North Vietnam for an incident which Defense Sec. Robert McNamara admits “didn’t happen,” and invade Iraq based on weapons of mass destruction it didn’t have — and at least 935 other documented lies – – –

What I’ve said, and I will say today, is that the intelligence we have is they have not made the decision to proceed with the development of a nuclear weapon.  —U.S. Defense Secretary Leon PANETTA, Meet The Press, February 3, 2013

The “innies” — like Mr. Panetta for example — know perfectly well Iran’s government has no nuclear weapons program. But almost certainly because the U.S. Government often marches to Israel’s drumbeat, it’s clear Mr. Panetta is reluctant to reveal that inconvenient truth. Chuck Hagel did reveal it. Which is one reason his appointment as Defense Secretary is being held up.

TODD: Why do you believe they’re doing that?

MR. PANETTA: I think– I think the– it’s a clear indication they say they’re doing it in order to develop their own energy source. I think it is suspect that they continue to– to enrich uranium because that is dangerous, and that violates international laws… —Meet The Press, February 3, 2013

Mr. Panetta, apparently giving in to his political experience and training, is out-and-out lying. This does NOT “violate international laws” as Mr. Panetta asserts. Unlike Israel, for example, not only has Iran signed the Nuclear Non-Proliferation Treaty (NPT) — which allows the enrichment Iran is doing — but, despite Israel’s own clandestine nukes — and its intensive anti-Iran disinformation operations — Iran’s government has allowed much more stringent inspections than other NPT signatories.

And it’s no more dangerous for Iran to enrich uranium this way than for any other country which wants to produce nuclear-electric power. The U.S. for example.

TODD: And you do believe they’re probably pursuing a weapon, but you don’t– the intelligence doesn’t know what…

MR. PANETTA: I– no, I can’t tell you because– I can’t tell you they’re in fact pursuing a weapon because that’s not what intelligence says we– we– we’re– they’re doing right now. But every indication is they want to continue to increase their nuclear capability. And that’s a concern, and that’s what we’re asking them to stop doing.  —Meet The Press, February 3, 2013

So, exposed to even the feeble light of U.S. Main Stream Media, Mr. Panetta had to tell the truth. Again. So he reluctantly admits, “I can’t tell you they’re in fact pursuing a weapon because that’s not what intelligence says.” That would be all 16 official branches of the U.S. Intelligence Community, including his own C.I.A. that are telling him that — with unanimous “high confidence.”

Which is why keeping Iran from producing a nuclear weapon may be Mr. Obama’s most easily kept campaign promise.

None the less, Mr. Panetta insists that “every indication is they want to continue to increase their nuclear capability?” So, Mr. Panetta, your HUNCH is better than the carefully evolved high confidence conclusions of all 16 U.S. intelligence agencies? Really?

It’s this sort of obtuse double talk that gets politicians elected, bureaucrats like Mr. Panetta into lofty positions — and Chuck Hagel’s appointment as Defense  Secretary held up by Senators Lindsey Graham, John McCain, and the rest of Israel’s Amen Corner.

As already suggested, it’s also this sort of bureaucratic lying-by-obfuscation that caused the U.S. to unnecessarily nuke Japan twice in three days, attack North Vietnam for an incident which Defense Sec. Robert McNamara admits “didn’t happen,” and invade Iraq based on weapons of mass destruction it didn’t have — and at least 935 other documented lies.

So, will “we the people” allow our public servants to once again lie us into war? Squeak up!

Secretary of Defense Leon Panetta responds to a question about the legality of assassinating Anwar al-Awlaki: 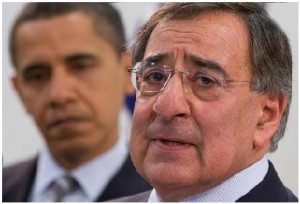 Usage guru Bryan A. Garner writes of the word “clearly,”

Exaggerators like this word, along with its cousins (obviously, undeniably, undoubtedly, and the like). Often a statement prefaced with one of these words is exceedingly dubious. (The Oxford Dictionary of American Usage and Style, Oxford University Press, 2000.)

Indeed, take a look at “Anwar al-Awlaki’s Suspected Ties to Terror Plots.” Notice that in only one of the eight plots is there any mention of al-Awlaki’s participation; all the others involve “inspiration” or religious instruction, often of people al-Awlaki never met. But let’s not dwell too much on details. Leon Panetta doesn’t. He follows his “clearly” statement with a tautology (“if you’re a terrorist, you’re a terrorist”). Then comes an equivocation about the administration’s “ability” to do what it did. If Panetta means the physical or mental power to perform the act, then this is self-evidently correct and irrelevant. If he means the legal authority, then he has, in the words of The Oxford Dictionary of Philosophy, “assum[ed] what is at issue in an argument,” or begged the question (yes, that phrase actually means something). He wraps up with a wordier version of undeniably (“there’s no question”), makes the preceding equivocation plain by distinguishing “authority” from “ability,” and again begs the question.

Panetta was once a practicing lawyer. I see now why he prefers extrajudicial methods.