It’s been 15 years since they lied us into Iraq War II.

So I did a couple of long, in-depth interviews with Jonathan Schwarz about how and why they lied us into it, and Gareth Porter about how the war played out.

Especially for those of you who were too young or wrong back then to know about it, I hope it’s helpful.

“There is a holy mistaken zeal in politics as well as in religion. By persuading others, we convince ourselves,” or so said the forgotten English writer Junius in the mid-18th Century. When I read his words the other day I was reminded of other situations where ideology and ignorance of history replaced reason.

Operation Unthinkable is one of many such examples, a loonie scheme hatched in early 1945 by Winston Churchill. Exhausted by six years of war, drinking heavily, with a loathing for his Soviet nemesis — though he once told Field Marshal Montgomery he and Stalin could resolve all their problems if only they met weekly over dinner fortified with an ample supply of scotch and vodka.

Churchill wanted to forgive the Nazis and instead have 100,000 of their Wehrmacht troops link up with the British and Americans to attack the victorious Red Army as it sped toward Berlin and therefore “impose the will of the Western Allies on the Soviets.” The plan was clearly insane and unenforceable yet Churchill ordered the British Armed Forces Joint Planning Staff to develop his idea until rational members of his inner circle said No. END_OF_DOCUMENT_TOKEN_TO_BE_REPLACED

I was hired in 1972 by the American Jewish Committee to serve as editor of a new magazine I named Present Tense. My vague assignment was to be more “Jewish” than the well-established and influential Commentary magazine, which, while also parented by the AJC, had shifted its primary attention to more worldly interests under Norman Podhoretz, its smart and creative editor, who had abandoned his and the magazine’s traditional liberalism and moved right, very far right, into the brawling territory of U.S. foreign policy and national politics. From 1972 to 1990, when we were closed down, my office was one flight below that of Commentary.

From the very beginning Present Tense was “a sort of counter-Commentary,” as Susan Jacoby, one of our regular columnists, shrewdly noted in her illuminating book, “Half-Jew: A Daughter’s Search for Her Family’s Buried Past.” Early on, a reader wrote us that we were doomed to obscurity and worse because the further we veered left, the more we became too liberal for the AJC’s conservative donors (they also had liberal donors, equally unhappy with Commentary). Even so, we lasted for many years, sometimes taking on the Israel Lobby, disdainful of Reagan for Iran-Contra and his proxy war in Central America, while celebrating his anti-nuke huddle in Reykjavik with Gorbachev and publishing all sides of the intractable Israeli-Palestinian conflict—and I mean, all sides, including right, center and left. We also refused to forgive and forget the ugly legacy of McCarthyism and how its impact still blunted dissent in the American Jewish world, as the novelist and journalist Anne Roiphe, another of our intrepid columnists, pointed out in our final issue. END_OF_DOCUMENT_TOKEN_TO_BE_REPLACED 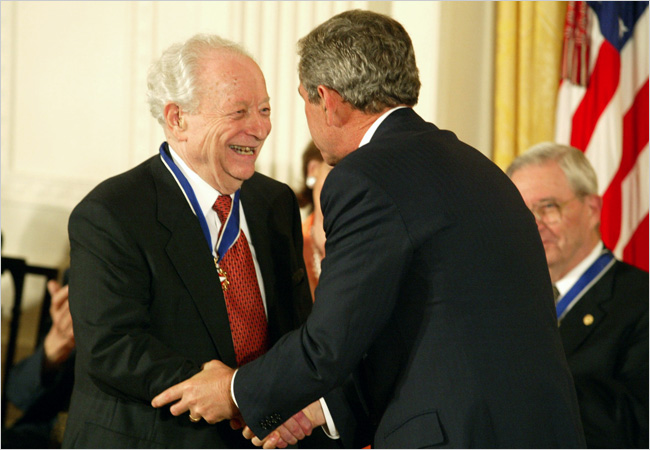 He identified the neocon agitation to replace the old perpetual war with a new one as soon as it started.

In 1990, Murray Rothbard clearly identified the earliest signs of the ultimately successful decade-long push by the neocons to replace their dearly missed Cold War with a global, imperialist, and permanent War on Islamic fundamentalism and for “Democracy.” He wrote in his April 1990 column “The Post-Cold War World: Whither U.S. Foreign Policy” (which can be found in the collection The Irrepressible Rothbard):

“But if the Cold War died in the Communist collapse of 1989, what can the ruling conservative-liberal Establishment come up with to justify the policy of massive intervention by the U.S. everywhere on the globe? In short, what cloak can the Establishment now find to mask and vindicate the continuance of U.S. imperialism? With their perks and their power at stake, the Court apologists for imperialism have been quick to offer excuses and alternatives, even if they don’t always hang together. Perhaps the feeling is that one of them may stick.

The argument for imperialism has always been two-edged, what the great Old Rightist Garet Garrett called (in his classic The People’s Pottage) “a complex of fear and vaunting.” Fear means alleged threats to American interests and the American people. To replace the Soviet-international Communist threat, three candidates have been offered by various Establishment pundits. (…) [Rothbard here offers international narco-terrorism and reunified Germany as the first two potential bogeymen.]

A third threat has been raised in the Wall Street Journal by that old fox, the godfather of the neocons, Irving Kristol. Kristol, in a rambling account of the post-Cold War world, leaps on the “Islamic fundamentalist” threat, and even suggests that the U.S. and the Soviet Union should discreetly cooperate in putting down this looming world period. Here we see a hint of a new conservative-liberal concept: a benign rule of the world by the United States, joined by the Soviet Union as a sort of condominium-junior partner, along with Western Europe and Japan. In short, an expanded Trilateral concept. Of course, pinpointing Islamic fundamentalism comes as no surprise from the neocons, to whom defense of the State of Israel is always the overriding goal.
END_OF_DOCUMENT_TOKEN_TO_BE_REPLACED