Antiwar.com opinion editor Kyle Anzalone gave this great speech at the End the Damn Wars rally in Denver on September 11. 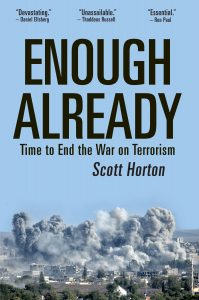 END_OF_DOCUMENT_TOKEN_TO_BE_REPLACED

Some of what he did say was leaked by the administration: for example, the claim that bin Laden and his ally Abu Musab al-Zarqawi [Zarqawi was not an ally of Saddam Hussein or Osama bin Laden -editor] were working directly with Saddam Hussein to destabilize the autonomous Kurdish region in northern Iraq. There was much more, says the analyst who worked at the Pentagon: “I first saw the reports soon after Abu Zubaydah’s capture. There was a lot of stuff about the nuts and bolts of al-Qaeda’s supposed relationship with the Iraqi Intelligence Service. The intelligence community was lapping this up, and so was the administration, obviously. Abu Zubaydah was saying Iraq and al-Qaeda had an operational relationship. It was everything the administration hoped it would be.”

Within the administration, Abu Zubaydah’s interrogation was “an important chapter,” the second analyst says: overall, his interrogation “product” was deemed to be more significant than the claims made by Ibn al-Shaykh al-Libi, another al-Qaeda captive, who in early 2002 was tortured in Egypt at the C.I.A.’s behest. After all, Abu Zubaydah was being interviewed by Americans. Like the former Pentagon official, this official had no idea that Abu Zubaydah had been tortured.

“As soon as I learned that the reports had come from torture, once my anger had subsided I understood the damage it had done,” the Pentagon analyst says. “I was so angry, knowing that the higher-ups in the administration knew he was tortured, and that the information he was giving up was tainted by the torture, and that it became one reason to attack Iraq.”

By the way, Zubaydah was not even a member of al Qaeda at all, much less their “Number 3 Lieutenant.”

Update: Pro Publica has completely retracted their story claiming that Gina Haspel was in charge of the torture dungeon in Thailand at the time Abu Zubaydah was held there.

He was still tortured into lying us into war with Iraq, but not by her, apparently.

Governments survive on myth. Truth is dangerous. As Chief Nazi “Information Officer” Goebbels put it, “…the truth is the mortal enemy of the lie, and thus by extension, the truth becomes the greatest enemy of the State.”

While the main stream media averts its eyes, the Emperor shivers.

Why would you shoot your highest-value-in-history information-laden target in the head immediately, before he can talk, especially since he isn’t armed and doesn’t resist? And then deep-six the body at sea out of respect for his religious preferences. But you get that wrong. And you don’t want to release photos because, well – – – – ah – – –

We need better scripts!  It’s even been suggested Uncle should hire better fiction writers. Maybe they should tap Philip Kraske – – –

“But I think, in this case” — a long pause — “the best we can do is the impression of photos, the news of photos, rather than the photos themselves. Photo-shopping some old photos is but the work of an hour, and then we release them on a limited, official basis. We send –“

“Forget it,” said the CIA man flatly. “The Truthers will go through ten thousand photos of bin Laden till they find the one we used.”

… “Well now, I don’t know here,” said the Marine general. You don’t release any photos, sir, and you’re not going to convince your grandmother. With all respect.”

Others nodded vigorously. The Rainmaker wondered if any of them had greater intellect than the chairs they sat on.

…”Let’s remember, dear ones, that our job is not to convince, but merely to give people one or two good reasons not to believe any other version. This is a distinction that I’m always having to explain to various agencies. Sometimes, as in an espionage op, you do indeed need to convince. But this is a public psy op. Here we play with a natural advantage” — a tiny chuckle — “and I would imagine it drives the 9-11 Truthers nuts: Americans naturally believe their government.  — Philip Kraske, Zero Light Twenty (or Forty — Whatever)

So, why would you shoot your highest-value-in-history information-laden target in the head immediately, before he can talk?