“The technotronic era involves the gradual appearance of a more controlled society. Such a society would be dominated by an elite, unrestrained by traditional values. Soon it will be possible to assert almost continuous surveillance over every citizen and maintain up-to-date complete files containing even the most personal information about the citizen. These files will be subject to instantaneous retrieval by the authorities. ” –National Security Adviser Zbigniew Brzezinski, Between Two Ages: America’s Role in the Technetronic Era, Published October 28th, 1976 by Penguin Books

Governments survive on myth. Truth is dangerous. As Chief Nazi “Information Officer” Goebbels put it, “…the truth is the mortal enemy of the lie, and thus by extension, the truth becomes the greatest enemy of the State.”

While the main stream media averts its eyes, the Emperor shivers.

Why would you shoot your highest-value-in-history information-laden target in the head immediately, before he can talk, especially since he isn’t armed and doesn’t resist? And then deep-six the body at sea out of respect for his religious preferences. But you get that wrong. And you don’t want to release photos because, well – – – – ah – – –

We need better scripts!  It’s even been suggested Uncle should hire better fiction writers. Maybe they should tap Philip Kraske – – –

“But I think, in this case” — a long pause — “the best we can do is the impression of photos, the news of photos, rather than the photos themselves. Photo-shopping some old photos is but the work of an hour, and then we release them on a limited, official basis. We send –“

“Forget it,” said the CIA man flatly. “The Truthers will go through ten thousand photos of bin Laden till they find the one we used.”

… “Well now, I don’t know here,” said the Marine general. You don’t release any photos, sir, and you’re not going to convince your grandmother. With all respect.”

Others nodded vigorously. The Rainmaker wondered if any of them had greater intellect than the chairs they sat on.

…”Let’s remember, dear ones, that our job is not to convince, but merely to give people one or two good reasons not to believe any other version. This is a distinction that I’m always having to explain to various agencies. Sometimes, as in an espionage op, you do indeed need to convince. But this is a public psy op. Here we play with a natural advantage” — a tiny chuckle — “and I would imagine it drives the 9-11 Truthers nuts: Americans naturally believe their government.  — Philip Kraske, Zero Light Twenty (or Forty — Whatever)

So, why would you shoot your highest-value-in-history information-laden target in the head immediately, before he can talk?

Ralph Nader and Busboys & Poets will host a thought-provoking roundtable discussion on Monday, September 12, 2011. Looking at the tenth anniversary of 9/11 in a forthright way that promotes forward thinking.

Roundtable participants will include:

Bill Keller provides a handy list of people who should have been eternally discredited by their behavior after 9/11:

During the months of public argument about how to deal with Saddam Hussein, I christened an imaginary association of pundits the I-Can’t-Believe-I’m-a-Hawk Club, made up of liberals for whom 9/11 had stirred a fresh willingness to employ American might. It was a large and estimable group of writers and affiliations, including, among others, Thomas Friedman of The Times; Fareed Zakaria, of Newsweek; George Packer and Jeffrey Goldberg of The New Yorker; Richard Cohen of The Washington Post; the blogger Andrew Sullivan; Paul Berman of Dissent; Christopher Hitchens of just about everywhere; and Kenneth Pollack, the former C.I.A. analyst whose book, “The Threatening Storm,” became the liberal manual on the Iraqi threat.

Alas, the “Eternally Discredited” and “Handsomely Rewarded” files keep getting mixed up in this best of all possible worlds.

While we’re all in retrospective mode, I’ll note that our friends at The American Conservative just debuted a new blog by Rod Dreher. Dreher, as you probably don’t remember, contributed to National Review from around 2001-2006. I do remember, as I followed National Review‘s blog closely during the run-up to the Iraq invasion (I even wrote a little tribute). I particularly remember one hot streak Dreher, then 36 years old, went on on March 17, 2003, the day President Bush gave Saddam Hussein an ultimatum and the day after Rachel Corrie got crushed by an Israeli bulldozer. Some highlights:

TEACH YOUR CHILDREN WELL [Rod Dreher]
The Little Green Footballs blog has a couple of photographs up showing the dead human shield Rachel Corrie showing Palestinian kids how to burn an American flag. Remind me again why we’re supposed to feel sorry for this America-hating, terrorist-loving idiot?
Posted at 11:32 AM

THE “BLIXIE CHICKS” [Rod Dreher]
“Up with Darryl Worley, down with the Blixie Chicks,” writes a Washington, DC, country fan, who’s thrilled by the news that country stations nationwide are dumping the Bush-bashing trio. The “Blixie Chicks” — I like that.
Posted at 11:41 AM

ONE CASUALTY OF WAR [Rod Dreher]
I’ve noticed, with regret, that it has become impossible to discuss the war with friends who oppose it. Mind you, I live in New York City, so I suppose it’s possible that people who are against the war are having similar problems offering their views in Red America. A liberal neighbor of mine stopped his car in the middle of the street the other day when he saw me on the sidewalk, and shouted out, “Your president is dragging us into a war nobody wants!” An old friend down South who is very liberal, and who denounced me in a scathing letter when I told her I voted for Bush (I then had to “confess” that I worked for NR), seems to have cut me off after a letter of months ago in which I said I supported war with Iraq. Haven’t heard a word from her since. This past February was the first birthday of mine in 22 years on which she hasn’t sent me a card.

Much more difficult for me to deal with are many of my anti-war conservative friends, with whom I have much more in common, and around whom I spend vastly more time. I’ve had no luck discussing things with them. I do believe there is a coherent conservative case to be made against war with Iraq, but in my experience, things from their side quickly degenerate into hot-tempered, paranoid expectorating about — you guessed it — the Jews. And once it goes that far, it’s game over. No rational discussion is possible.

And this is before the shooting has even started! I wonder if friendships are going to be a casualty of this war. Do you?
Posted at 01:23 PM

Well, that’s enough blockquoting, but be sure to check out these two gems: “MYXOMATOSIS” and HUMBLE BUT MAGNIFICENT. Ah, youth! Anyway, congrats to Rod and The American Conservative.

UPDATE: I’ve been accused of cherry-picking. OK. Please, do go read every single word Dreher wrote at National Review — for instance, this dusty relic from prehistory. Islamocalypse! Apparently, at some point after Dreher left National Review for far less prominent publications, he had some second thoughts. I’m not terribly impressed by what people say after the damage is done, but here you go. 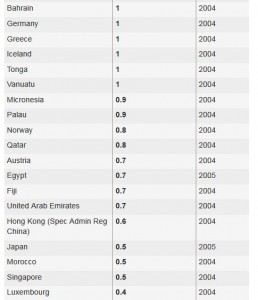 Whatever you believe about punishment, deterrence, rehabilitation, and the rest of criminology, you have to acknowledge the risks of overreacting to tragedies. For example:

After all these years, Jane WAS Right!

British political news has been consumed for the last several weeks by a formal inquiry into the illegality and deceit behind Tony Blair’s decision to join the U.S. in invading Iraq…. A major focus of the investigation is the illegality of the war. … –Remember the illegal destruction of Iraq?, By Glenn Greenwald, Salon, Friday, Jan 29, 2010 07:30 EST

The day of accountability is at hand. The International Criminal Court at the Hague has acknowledged receipt of Prof. Francis A. Boyle’s complaint… The Hague Acknowledges Francis Boyle On His Filing Against Bush et al For War-Crime: Extraordinary Rendition, Thu, 2010-01-28 18:08.